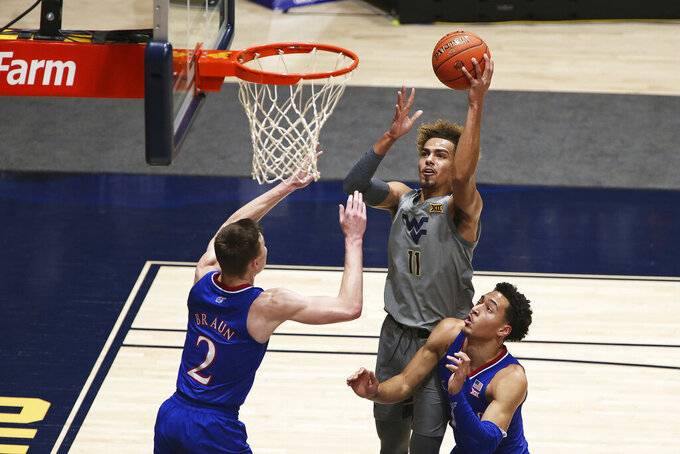 The Mountaineers (13-5, 6-3 Big 12) never trailed and got off to a good start in a challenging stretch where they will play six straight opponents that are currently ranked.

Kansas (12-7, 6-5) lost its fifth straight road game. The Jayhawks couldn’t rely on a barrage of 3-pointers as they did in beating West Virginia at home on Dec. 22 — they were 7 of 20 from long distance on Saturday.

McBride also had seven rebounds and eight assists. Derek Culver had 19 points and nine rebounds for his 10th double-double of the season.

Trailing by 10 at halftime, Kansas forced several turnovers to tie it. But McBride and Sherman were dominant, combining to score 33 points in the second half while shooting 10 of 15.

McBride broke out of a mini-slump that saw him held to nine points in the previous two games. The sophomore hit a 3-pointer with 14:15 left to put West Virginia ahead to stay.

Emmitt Matthews made a 3-pointer and Sherman followed with a three-point play to put West Virginia ahead 84-71 with 2:30 left. The Mountaineers made five of their last seven shots.

Kansas: Coach Bill Self fell to 3-6 against West Virginia in Morgantown. The Jayhawks have lost five of their last seven games and will need a solid push over the final month to improve their NCAA Tournament seeding with games still remaining against ranked opponents Baylor, Texas and Texas Tech.

West Virginia: The Mountaineers needed a good shooting performance and made 50% (32 of 64) of their field goals. They also forced 18 turnovers. Every time coach Bob Huggins beats Kansas, he gets a $25,000 contract bonus that he donates to cancer research in his late mother’s name.

The Jayhawks could drop out of the AP Top 25 poll for the first time since February 2009, a record streak of 231 consecutive weeks. West Virginia should move up with its second straight win.

West Virginia plays at No. 13 Texas Tech on Tuesday. The Mountaineers beat the Red Raiders 88-87 in Morgantown on Jan. 25.