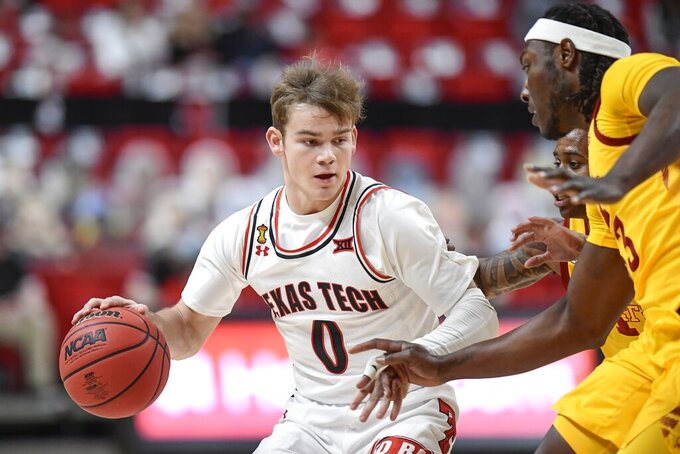 LUBBOCK, Texas (AP) — Mac McClung and Texas Tech are on a three-game winning streak again — just as the No. 18 Red Raiders were the last time they played third-ranked Baylor.

Now the school that reached the championship game in the most recent NCAA Tournament two years ago gets a rematch with this year's Big 12 favorite for a deep postseason run.

Coming off an 81-54 rout Thursday night that dropped Iowa State to 0-17 in conference, coach Chris Beard just wants the Red Raiders to savor Sunday's visit to the Bears, who have already wrapped up their first Big 12 regular-season championship.

“I want to see a confident, aggressive team, a team with joy, a team that is looking forward to playing one of the best teams in the country on the road,” Beard said. “It’s a great opportunity to see where we stack up before March Madness starts.”

McClung scored 20 points as Texas Tech kept rolling in the aftermath of a three-game losing streak, the longest of the season, by pulling away from Iowa State in the second half.

Marcus Santos-Silva had 14 points and seven rebounds as Texas Tech (17-8, 9-7 Big 12) wrapped up its home schedule with a fifth consecutive victory over the Cyclones, the longest winning streak for either team in the series. Terrence Shannon Jr. and Micah Peavy scored 12 points apiece, and Kyler Edwards had 11.

With their 16th consecutive loss, the Cyclones (2-20, 0-17) clinched the most Big 12 losses in a season since TCU went 0-18 in 2013-14. Iowa State will try to avoid matching that dubious record in the regular-season finale against Kansas State on Saturday.

Jalen Coleman-Lands and Tyler Harris each scored 15 points for Iowa State, which already had the most conference losses in school history and now has a second consecutive 20-loss season overall.

After trimming an early 16-point deficit to 31-27 late in the first half, Iowa State was still within nine with 13 minutes remaining when McClung, the No. 5 scorer in the Big 12, scored seven points and Santos-Silva had six on a 15-2 run for a 67-45 lead.

Texas Tech, which lost to Virginia in overtime in the 2019 NCAA title game, won't have to worry about a first-round game in the Big 12 Tournament.

Because of No. 16 Oklahoma's 69-65 loss to 15th-ranked Texas on Thursday night, the Red Raiders are guaranteed to be seeded no lower than sixth, meaning they won't have to play until the quarterfinals in Kansas City.

“Everybody kind of has an opinion, rest versus momentum,” Beard said. “I'm just looking forward to playing, whatever time, whatever day.”

Iowa State: The Cyclones were NCAA Tournament regulars when coach Chris Beard took over at Texas Tech in 2016. Now they're going to miss a second consecutive March Madness while the Red Raiders for a third straight NCAA trip. The past four Texas Tech wins over Iowa State have been by at least 20 points.

Texas Tech: The Red Raiders shot a season-best 62%, while Edwards was 3 of 4 from beyond the arc to put him at 7 of 9 over the past two games. McClung was 7 of 12 from the field while Peavy and Santos-Silva each went 6 of 8.

“Talked to him a couple of years ago about trying to get him in the game senior night if that opportunity presented itself,” Beard said. “It's not like we're just putting guys out there. Ty was a good player in junior college and has done a great job in his role here.”

Iowa State: The originally scheduled trip to Kansas State Jan. 13 was the first of four consecutive Iowa State games postponed because of COVID-19 issues. One of three Big 12 victories for the Wildcats was 74-65 at Iowa State in the conference opener for both teams in December.

Texas Tech: Both of the three-game winning streaks going into the Baylor games included victories over No. 15 Texas. Texas Tech scored just 18 points in the first half to fall behind by eight and lost by that margin (68-60) after briefly taking the lead in the second half.