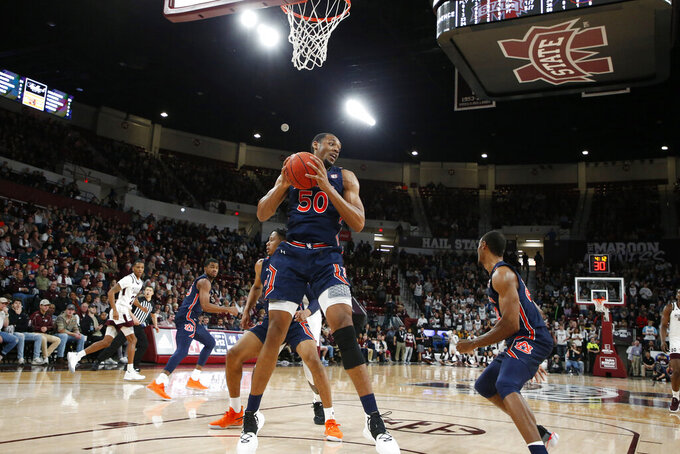 Auburn center Austin Wiley (50) pulls down a rebound against Mississippi State during the first half of an NCAA college basketball game, Saturday, Jan. 4, 2020, in Starkville, Miss. (AP Photo/Rogelio V. Solis)

STARKVILLE, Miss. (AP) — J'Von McCormick scored a career-high 28 points to lead No. 8 Auburn to an 80-68 win over Mississippi State on Saturday in the Southeastern Conference opener for both teams.

McCormick went 9 for 17 from the field and 8 for 11 at the line. The senior guard also had four assists and two steals.

Reggie Perry had 21 points and 12 rebounds for the Bulldogs in his 16th career double-double. Nick Weatherspoon scored 18 points, and Robert Woodard had 12 points and 12 boards. Abdul Ado finished with a career-high nine blocked shots and 11 rebounds.

Both teams struggled offensively in the opening half. Auburn missed 22 of its first 25 shots as Mississippi State opened an 18-9 lead.

But the Bulldogs turned cold, missing 13 of their next 14 attempts as Auburn reeled off nine straight points to tie the game on McCormick's layup with 3:48 remaining. The Tigers finished the half on an 11-6 run and held a 29-24 advantage at halftime.

Mississippi State: The Bulldogs didn't get the start they needed in SEC action. The Bulldogs now travel to Alabama and LSU next week to open up their league road schedule.

Mississippi State: The Bulldogs travel to Alabama on Wednesday.