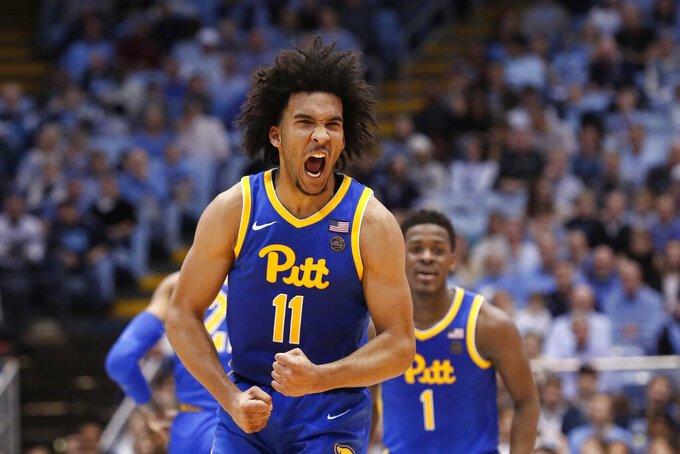 CHAPEL HILL, N.C. (AP) — Pittsburgh’s road skid is over. North Carolina’s problems at home are far from it.

Justin Champagnie added 22 points for the Panthers (11-4, 2-2 Atlantic Coast Conference), who rallied from a 14-point deficit late in the first half.

Pittsburgh won on the road in league play for the first time since it defeated Boston College 83-72 on Feb. 8, 2017.

“For us to be able to do that, I don’t think it’s coincidence that we had to have a lot of adversity and a lot of things that we didn’t do in the first half and to get down and come back,” Pittsburgh coach Jeff Capel said. “But it means a lot for us. We have to build off it, though.”

McGowens snapped a 56-56 tie by scoring eight consecutive points in a 90-second span, giving the Panthers the lead for good with seven minutes remaining.

Xavier Johnson scored 17 points for the Panthers. Pittsburgh stormed back with a 16-4 run early in the second half and made 8 of 12 3-pointers after halftime.

“It’s big,” Champagnie said. “Everybody in the locker room is smiling and happy. We haven’t done this in a long time, so it felt good all around.”

Garrison Brooks had 21 points and 10 rebounds to lead North Carolina (8-7, 1-3). Armando Bacot added 15 points and Brandon Robinson had 13 points for the Tar Heels.

North Carolina lost for the sixth time in eight games and for the fourth time in its last five home games.

Pittsburgh: The school announced a two-year contract extension (through the 2026-27 season) for Capel on Wednesday morning, and Capel wasted no time rewarding the administration’s faith. It was a breakthrough win for the Panthers, who bounced back after squandering a 16-point lead in a 69-65 home loss against Wake Forest on Saturday.

North Carolina: The Tar Heels are in trouble. They just lost back-to-back home games to teams projected to finish in the bottom half of the ACC, and much tougher games loom in February. Four days after allowing Georgia Tech to shoot 59% from the floor in a 96-83 home loss, the Tar Heels let Pittsburgh shoot 58% in the second half. “I’d like to come up with something witty, and something different, something … but I don’t have it,” North Carolina coach Roy Williams said. “I thought our guys played harder tonight than we did against Georgia Tech.”

McGowens’ eight-point spurt was impressive down the stretch, but Champagnie shot the Panthers back into the game. He scored 12 consecutive Pittsburgh points during a four-minute stretch, making four straight 3-pointers as Pittsburgh took a 54-53 lead midway through the second half.

“I just saw one drop,” Champagnie said. “Then I just got more comfortable and confident and just started letting it go.”

Williams and his players addressed comments he made on his radio show Monday in which he said his team is the least gifted he has coached since he returned to North Carolina in 2003.

“That’s a statement that if anybody in here disagrees with, that’s your prerogative,” Williams said. “But my guess is that if you look at it, you’ll probably agree. I’m stunned by how it gets so much attention.”

“Obviously we didn’t win the game, but it definitely motivated us,” Bacot said. “I don’t think Coach meant any harm. He still believes in us. He’s just Coach; that’s how he is. He keeps it real.”

Pittsburgh: With their skid over, the Panthers get a chance on Sunday at Miami to build a road winning streak in ACC play.

North Carolina: The Tar Heels host Clemson on Saturday. Their 59-0 all-time home record against the Tigers is the longest home winning streak against a single opponent in NCAA history.