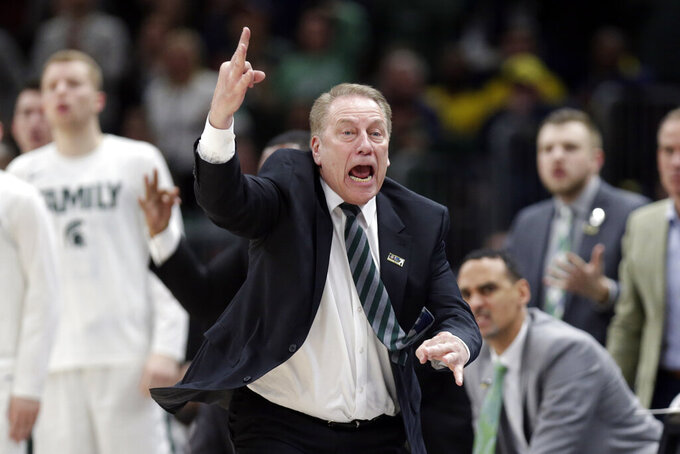 CHICAGO (AP) — Michigan State coach Tom Izzo had one simple question for his team. He got the answer he wanted, and the sixth-ranked Spartans picked up their sixth Big Ten Tournament championship.

Now, they'll try to bring home the biggest prize of all.

Matt McQuaid scored a career-high 27 points, Cassius Winston converted the go-ahead layup in the closing minute, and the Spartans rallied to beat No. 10 Michigan 65-60 in the Big Ten final on Sunday.

Top-seeded Michigan State (28-6) scored the game's final 10 points to capture its first championship since 2016. No other program has won the conference tournament as many times as Michigan State, and this one was particularly sweet.

After all, the Spartans prevented a championship three-peat by Michigan (28-6) and beat their rivals for the third time this season.

"They responded and I think they enjoyed it," he continued. "So did I."

McQuaid nailed a personal-best seven 3-pointers. Winston, the Big Ten Player of the Year, had 14 points and 11 assists as Michigan State won for the 10th time in 11 games.

"It's always big," McQuaid said. "Michigan's a really good team. Beating them three times ... it's hard to do."

Both teams were awarded No. 2 seeds in the NCAA Tournament and will play Thursday in Des Moines, Iowa. Michigan State faces Bradley in the East Region, while Michigan goes against Montana in the West. The Wolverines beat Montana last year on the way to the national championship game.

But the third-seeded Wolverines fell again to Michigan State after blowing their chance to win the league by losing to their rivals twice in the final four regular-season games.

"You lose three times in a season to your rival, it's gonna hurt" Isaiah Livers said. "But we'll use it as motivation for the NCAA Tournament. I'm glad we don't have a week or two weeks to sit there and think about that last game. We can get right back to playing."

Michigan led by 13 early in the second half, but Michigan State went on a 13-4 run to tie it at 48 with just over seven minutes remaining.

The Wolverines were up 60-55 after Livers hit a 3 with 2:29 left, but they didn't score again. McQuaid answered with one of his own to start the game-ending run and Xavier Tillman made a tying layup for Michigan State.

After Simpson missed a 3 for Michigan, Winston drove to his left for a layup — which Teske thought he blocked — to put the Spartans on top 62-60 with 28 seconds left.

Brazdeikas then missed a pull-up jumper that got tipped by Aaron Henry with 14 seconds to play. Teske and Tillman went up for the rebound, the ball got knocked out of bounds and the referees gave possession to Michigan State after a review as Michigan coach John Beilein screamed on the sideline.

Henry made a free throw and missed the second, making it a three-point game. Poole then appeared to get bumped by Winston — Michigan State had a foul to give — just before he launched a long 3 off the dribble, but there was no call.

Michigan State forward Kyle Ahrens was relieved X-rays showed his left ankle wasn't broken after he was taken from the court on a stretcher in the first half, though the extent of the injury was not clear.

He expects to have an MRI once the softball-sized swelling goes down.

Ahrens landed awkwardly when he collided in midair with Goins going for a defensive rebound with 4:34 left in the first half.

He clutched his lower left leg as he screamed in pain. Medical personnel placed an air cast on his leg and teammates gave him hugs before he was wheeled away, pounding his chest as he was taken to the back. He returned to the sideline on crutches in the second half.

Michigan: The Wolverines have their sights set on another big NCAA run after losing to Villanova in the championship game last year.

Michigan State: The Spartans head to the tournament with high hopes, though their rotation figures to be a little thinner after Ahrens went down.