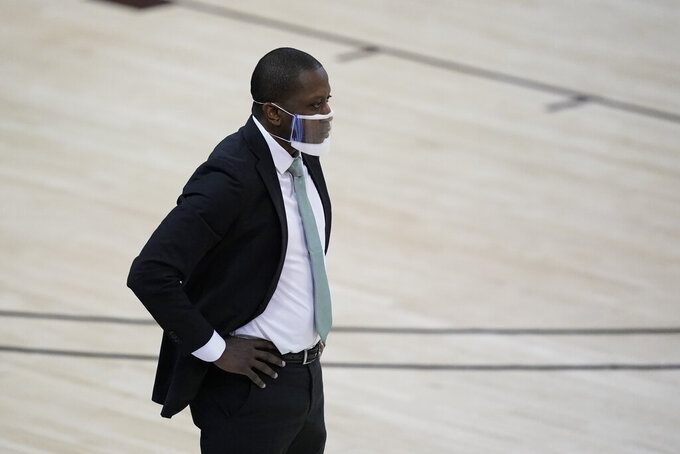 The book is never far from Dennis Gates' reach, with the inscription providing inspiration at every stop of his coaching journey — from Marquette to Cleveland State and numerous places in between.

It currently sits on a shelf in Gates' office, a reminder of a memorable car ride he shared with Kelvin Sampson 18 years ago. A 75-minute trip that helped shape his career.

“I didn't know it was going to be so impactful,” Gates said.

Or imagine he would one day coach against Sampson in the NCAA Tournament.

Gates, who has revived Cleveland State's program in just two seasons, will be back with Sampson on Friday as his 13th-seeded Vikings (19-7) — with a history for shocking big-name programs in the tournament — face No. 2 seed Houston (24-3) at Indiana's Assembly Hall.

It's a reunion of two coaches who first met when Sampson, then at Oklahoma, recruited Gates as a point guard from Chicago's Whitney M. Young High School.

After playing at Cal, Gates was hired as a graduate assistant at Marquette, and it was there that the 23-year-old was asked to drive Sampson from Milwaukee to Chicago's O'Hare Airport following a recruiting visit.

Gates recognized it as an amazing opportunity to pick the brain of one of college basketball's best coaches, especially a Black coach who had cut his own path to success. It was a chance to make a connection, a chance to learn, to find out what it takes to climb the coaching ladder.

His time with Sampson was limited, so Gates, like a coach trailing by 15 points at halftime, made an adjustment.

“I made sure I took the long route, so I could have an extra 15 minutes on the way,” the 41-year-old said with a laugh on a Zoom call from Indianapolis.

Gates peppered Sampson with questions, and socked away each of the answers as nuggets he would use to define his coaching philosophy. When the ride ended, Sampson said he'd stay in touch and then sent the young coach a copy of his book, “The OU Basketball Story.”

Sampson wrote on the inside jacket: “Dennis! Keep working — you will be a great coach one day.” Under his signature, Sampson added: “Always do your best.”

After Marquette, Gates worked at Florida State, back at his alma mater, Northern Illinois and Nevada before returning to the Seminoles and spending eight seasons on Leonard Hamilton's staff. He was hired in 2019 by Cleveland State.

Before he took over the Vikings, they lost at least 21 games in each of the five previous seasons.

Sampson remembers that car-ride conversation with Gates, who has put himself on the radar of athletic directors across the country. Cleveland State is expected to talk to Gates about a contract extension — he has three years left — after the season.

“Proud of him,” Sampson said. "They’ve got a keeper there in Dennis. They’re lucky to have him.”

Sampson is also pleased to learn his words and book are so meaningful to Gates.

“It might be a good luck charm for him,” he said. "That’s flattering. We all do something where we pay it forward. Jud Heathcote hired me as a grad assistant (at Michigan State) when he didn’t have to and he almost didn’t.

His gratitude and admiration for Sampson aside, Gates is getting his team ready to take on the Cougars, who have been among the nation's most consistent squads and one Cleveland State's coach believes was worthy of a No. 1 seed.

The Vikings, who recovered after giving up a record 40 straight points in a loss to Ohio in December, are making just their third NCAA Tournament appearance. But based on the first two visits, Houston had better be careful.

In 1986, Cleveland State shocked Bob Knight's Indiana team on the way to the Sweet 16, and in 2009, the Vikings conquered Wake Forest in the first round.

Gates has connected his players to the ones from those teams.

“We stand on their shoulders,” Gates said. “I got to respect that. There's not a time I don't reference them.”

It's something he may have picked up in a car ride nearly 20 years ago.