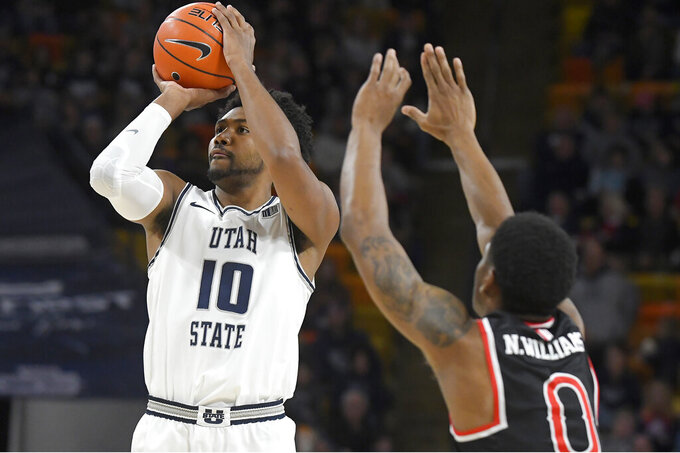 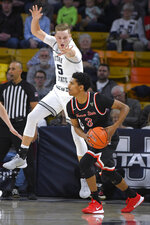 LOGAN, Utah (AP) — Utah State toughened its defense and opened up its offense in overtime to get past Fresno State.

Sam Merrill had 24 points and eight rebounds and Abel Porter scored seven of his 13 points in overtime as No. 25 Utah State beat Fresno State 77-70 on Saturday night.

“I think it says a lot about our guys, I think we held them scoreless for three-and-a-half minutes in overtime and then we found enough ways to get enough baskets,” Utah State head coach Craig Smith said.

Justin Bean added 14 points and Neemias Queta chipped in six points in 10 minutes, in his first action of the season for Utah State (9-1, 2-0 Mountain West).

“I thought we missed a couple of good, open looks. I thought the guys continued to execute and we just didn’t have a couple fall. I think we had a defensive breakdown on one end that really hurt us and they took advantage of it,” Fresno State head coach Justin Hutson said.

A wild final two minutes of regulation set up overtime.

After Nate Grimes hit a layup that cut the Aggies’ lead to one point, Diogo Brito hit a 3-pointer to give Utah State a four-point lead with 1:43 left in regulation.

Williams banked in a last-second 3-pointer from well-beyond the arc, with the shot rattling around the rim before dropping through the net and sending the game into overtime.

After Merrill made a layup to give Utah State a 33-32 lead with 16 minutes left in the second half, Fresno State went on a 9-0 run over the next four minutes to take a 41-33 advantage. Williams scored all nine points in the run. The Aggies’ scoring drought lasted nearly five minutes before Brito ended it with a three-point play. Orlando Robinson scored on a jumper, but Utah State countered with an 8-0 run to get back into the game with eight minutes remaining.

It was a seesaw matchup in the first half, with neither team shooting well. Utah State shot just 26.7% from the field in the first period, with Fresno State shooting 31.3%. The teams struggled with their long distance shooting as the Aggies went 1 of 10 and the Bulldogs 3 of 16.

Utah State star sophomore center Neemias Queta played his first minutes of the season against Fresno State. Queta, who averaged 11.8 points and 8.9 rebounds last year as a freshman for the Aggies, was recovering from a knee injury. Queta checked in at the 10-minute mark of the first half to a standing ovation from the Spectrum crowd. Queta scored his first two points of the season on free throws with nine minutes in the first half.

Fresno State: The Bulldogs hung with the Aggies thanks to a great performance by New Williams, but lost their fourth straight game — and second straight overtime game.

Utah State: The Aggies won their second straight game as Sam Merrill had an excellent game and Neemias Queta played his first minutes of the season.

Fresno State: The Bulldogs continue their three-game road trip in Berkeley next Wednesday, taking on California.