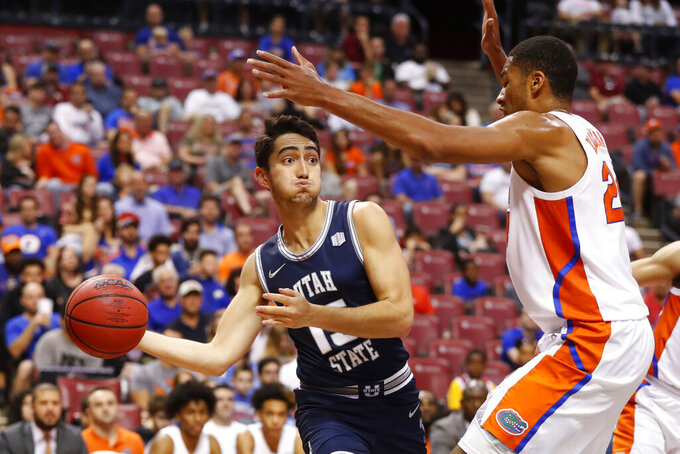 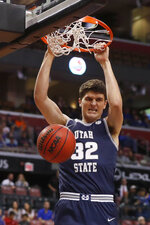 SUNRISE, Fla. (AP) — Utah State didn't give up a field goal in the first 10 minutes Saturday and still led by only four points, which was enough to make coach Craig Smith rub his jaw in disbelief.

Pain relief came soon enough for the Aggies. They shot 50 percent in the second half, including 5 for 12 from 3-point range, and held Florida without a field goal for six minutes down the stretch to win 65-62 in the Orange Bowl Classic.

“Early it was kind of a battle,” forward Justin Bean said. “No one was hitting many shots. It just took a lot of physicality from our guys, staying together, executing our sets and just knowing the shots would fall.”

The Aggies (12-2) improved to 3-0 in games decided by a one-possession margin. They won despite losing hard-luck center Neemias Queta to an undisclosed injury in the first half.

Florida (7-4) continued to struggle after being ranked sixth in the preseason. The Gators missed their first 14 shots, and missed seven in a row in the final minutes after taking a 55-54 lead.

“We got a little better today,” White said. “We had a chance to beat a really good team — as good a team as we’ll play this season.”

Sam Merrill led the Aggies with 21 points, nine rebounds and five assists. He went 5 for 10 from 3-point range.

“Sam Merrill was absolutely outstanding,” Smith said. “He set everything up for us.”

Diogo Brito's basket with 4:15 left put the Aggies ahead to stay, and he went 4 for 4 from the free throw line in the final 25 seconds. Bean had 12 points, nine rebounds and four assists.

Senior Kerry Blackshear led Florida with 22 points and a career-high 14 rebounds. He went 15 for 17 from the free throw line.

The Gators out-rebounded the tallest team in the nation 41-33 but shot only 32 percent, including 4 for 17 from 3-point range. Eight players missed before Florida finally sank a shot.

“We got good looks,” Blackshear said. “You’ve got to keep shooting.”

Queta, who recently returned from a knee injury, limped to the locker room in the first half. He went to the floor hard and was shaken up when he collided with a Florida player and was called for an offensive foul.

“It's not the injury he was out with for a while,” said Smith, but he provided no further information.

Queta averaged 11.8 points and 8.9 rebounds last season as a freshman.

The Gators fell to 17-4 in the annual one-day Orange Bowl Classic. When someone complimented White on agreeing to a tough match-up with the defending Mountain West Conference champions, he said: “Wasn’t a very good decision, was it?”

The Aggies were 34th in votes in the latest AP poll, and two wins this week might not be enough for them to crack the Top 25.

“They’re a team that could make a deep run in March,” White said.

Florida continues to be a puzzle with an offense that has failed to top 70 points seven times.