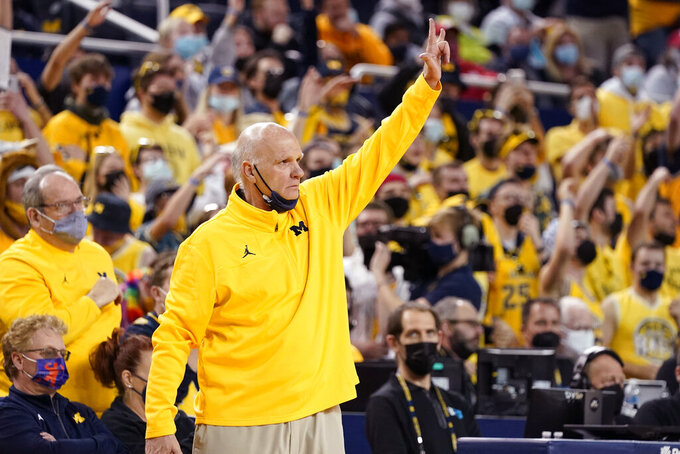 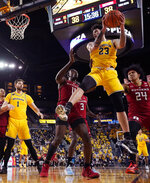 The former Saint Joseph's coach filled in for the suspended Howard for the first of five games Wednesday night, and guided the Wolverines to a 71-62 win over Rutgers.

After shaking hands with the visiting coaches and players along the sideline without incident, Martelli did a postgame TV interview near the blue block `M' at center court.

Michigan athletic director Warde Manuel was standing in the corner of the court closest to the team's locker room, waiting to hug the 67-year-old coaching veteran temporarily in charge of a basketball program without its coach for the rest of the regular season.

Martelli and Manuel embraced for more than a brief second, and it was clear the moment meant a lot to each.

“I’m here to serve, and to be acknowledged for serving is very much appreciated," Martelli said. “I will share this with you and I shared this with players before they went on the court. Warde Manuel did not ask me to try to coach this team. He said, `Do it,' so I did it. We did it. The players did it."

The Wolverines (15-11, 9-7) bounced back from a lopsided loss at Wisconsin, where Howard and two of their players were suspended for their roles in a postgame melee, with an impressive win in a matchup of Big Ten on the NCAA Tournament bubble.

“Coach Howard, he sent us a motivating text before the game and I think it fueled all of us," guard DeVante' Jones said.

Howard was relegated to following his team on TV, and no one in the postgame news conference said they knew where he watched the game.

The third-year coach, former NBA player and member of Michigan's Fab Five teams was suspended by the Big Ten and his school for the final five games of the regular season. Howard was punished for hitting a Wisconsin assistant coach in the head during the handshake line after a lopsided loss Sunday.

Martelli has won 445 games, and lost 328, but said there were just two times he was forced to watch his team play on TV after being ejected by officials.

“That was torture," he recalled. “Being in the locker room and watching this game and thinking, `I let everybody down.

If Michigan can play as it did against the Scarlet Knights, it will likely give Howard at least one chance to coach beyond the Big Ten tournament.

Rutgers had won four of its previous five games, beating four ranked teams, before losing by 11 points to the suddenly clicking Wolverines to help their NCAA Tournament hopes.

Caleb Houston had a career-high 21 points, boosting the team's record to 9-0 when the freshman guard scores at least 13.

Hunter Dickinson, who returned for his sophomore season instead of entering the NBA Draft, had 16 points, 11 rebounds and three blocks.

Without suspended players Moussa Diabate and Terrance Williams II for a game, Martelli still brought a few players off the bench, including Howard's son, Jace, to play when the game was in doubt.

Martelli said the players would have a perfectly timed day off before preparing to play No. 15 Illinois on Sunday.