Michigan gets first win in a month, slams Maryland 83-64 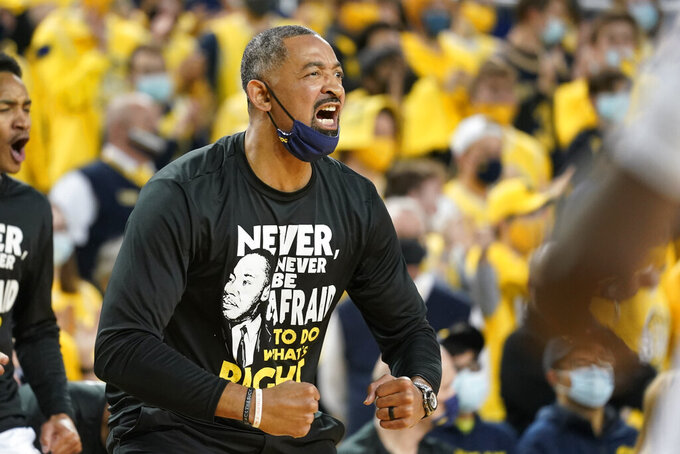 Michigan head coach Juwan Howard reacts to a play against Maryland in the first half of an NCAA college basketball game in Ann Arbor, Mich., Tuesday, Jan. 18, 2022. (AP Photo/Paul Sancya)

It was the first win for the Wolverines (8-7, 2-3 Big 10 Conference) since an 87-50 pasting of Southern Utah on Dec. 18. Prior to Tuesday, Michigan suffered through a three-game losing streak, had two games postponed and another canceled due to COVID-19 protocols.

Michigan never trailed against Maryland. The Wolverines used a 9-0 run to extend their lead to 20-9 with Caleb Houstan scoring a layup and a three-point play to ignite the 81-second outburst.

Michigan finished the half up 39-19 with Moussa Diabate, Houstan and Devante Jones each scoring 10 points. The trio made 13 of Michigan’s 16 baskets in the first half. Houstan finished with 16, Diabate 14 and Jones 12.

The Terrapins established some momentum and closed to 57-44 with an 11-6 run with 11:12 remaining. But Fatts Russell missed a contested layup and Frankie Collins laid in an acrobatic lob off a pass from Eli Brooks and Michigan was never threatened again.

The Terrapins are scheduled to host 17th-ranked Illinois on Friday. Michigan is scheduled to play at Indiana on Sunday.