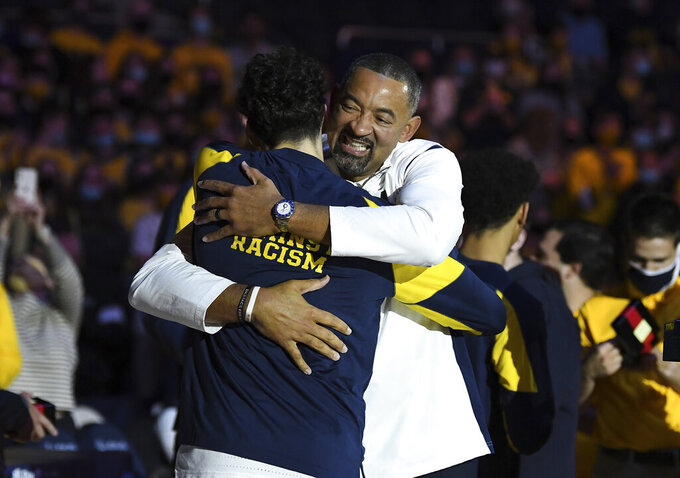 ANN ARBOR, Mich. (AP) — Michigan and men's basketball coach Juwan Howard have agreed to a five-year extension totaling over $16.9 million that keeps him under contract through the 2025-26 season.

The announcement was made by athletic director Warde Manuel on Tuesday night, a couple hours before the reigning Associated Press coach of the year led the fourth-ranked Wolverines against Seton Hall.

“I’m honored to be regarded in such a way that the university wished to continue a lasting relationship with me,” Howard said. “It was a surprise when Warde approached me, and it didn’t take long for us to get on the same page.

“I’m grateful to him, our great university and my talented young men who sacrifice every day. The love I have for the University of Michigan is beyond words.”

Contract details released Wednesday through a public records request show Howard will make $3.25 million the first year of the contract. The figure goes up to $3.32 million, $3.38 million, $3.45 million and $3.52 million each of the ensuing years.

Manuel hired Howard in May 2019, giving the Miami Heat assistant and member of Michigan’s Fab Five a chance to be a head coach. Howard replaced John Beilein when he bolted to coach the Cleveland Cavaliers.

“I couldn’t be happier for our student-athletes and fans to know that Juwan will continue to lead Michigan into the future,” Manuel said. “His great character is second to none, and he is a wonderful teammate — demonstrated through his commitment to proactive communication and collaboration across the department."

The Wolverines won their first two games this season and are contenders to win the national championship. They went 23-5 last season and won the Big Ten title and reached a NCAA Tournament regional final. In Howard's first years as a head coach during the 2019-20 season, he won 19 games before the pandemic ended college basketball's postseason tournaments.

As a player, Howard helped Michigan reach the national championship game in 1992 and 1993. He played alongside Chris Webber, Jalen Rose, Jimmy King and Ray Jackson. The school later removed the Fab Five's banners from Crisler Arena and stored them at one of its libraries as part of sanctions from an NCAA financial scandal.

The 48-year-old Howard, who is from Chicago, played at Michigan for three seasons before Washington drafted him No. 5 overall in 1994. The two-time NBA champion with the Heat and one-time All-Star averaged 13.4 points, 6.1 rebounds and 2.2 assists during his career that ended after the 2012-13 season.