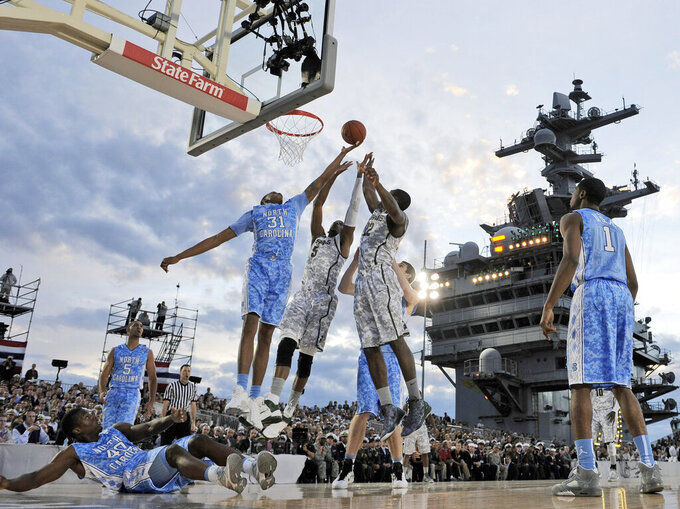 FILE - North Carolina forward John Henson (31) vies for a rebound with Michigan State center Adreian Payne (5) and forward Branden Dawson (22) during the first half of the Carrier Classic NCAA college basketball game aboard the USS Carl Vinson, Nov. 11, 2011, in Coronado, Calif. They're going to try to play college basketball on an aircraft carrier again, and Tom Izzo and the Michigan State Spartans will get a return trip to San Diego Bay to face Gonzaga on the flight deck of the USS Abraham Lincoln on Nov. 11. (AP Photo/Mark J. Terrill,File)

Michigan State has signed coach Tom Izzo to a new deal valued at $6.2 million per season, giving him about $2 million more each year.

The school announced the deal Thursday, saying that the five-year rollover contract will need to be approved by its board next month.

“Michigan State has been a home to me and my family for 40 years and I’m ecstatic to sign this contract,” said Izzo, who was hired at the school by the late Jud Heathcote as a part-time assistant in 1983.

Izzo, 67, who was inducted into the Basketball Hall of Fame in 2016, won a national championship in 2000 and leads all active coaches with eight Final Four appearances. He led Michigan State to a Big Ten-record 24th straight NCAA Tournament last season. He has won the Big Ten title 10 times in the regular season and six conference tournament championships.

“We have worked hard to maintain championship standards and I’m as energized to coach now as I was when I started as the head coach in 1995," Izzo said.

Izzo was promoted from assistant to head coach to replacing the retiring Heathcote.

After a slow start, the hard-driving coach turned the program into a national powerhouse by focusing on rebounding, defending and playing top-flight competition each season before Big Ten play.

Izzo, who is from Iron Mountain, Michigan, in the state's Upper Peninsula, has won more games (666) than any coach at a Big Ten school. He has lost 267 times, averaging fewer than 10 losses per season.

Izzo has had multiple chances to leave Michigan State for the NBA and to coach at other colleges and turned down each opportunity, including one from the Cleveland Cavaliers in 2010.

“Twelve years ago, Tom Izzo said he would be a Spartan for life, and today’s announcement further demonstrates and renews this commitment,” athletic director Alan Haller said.