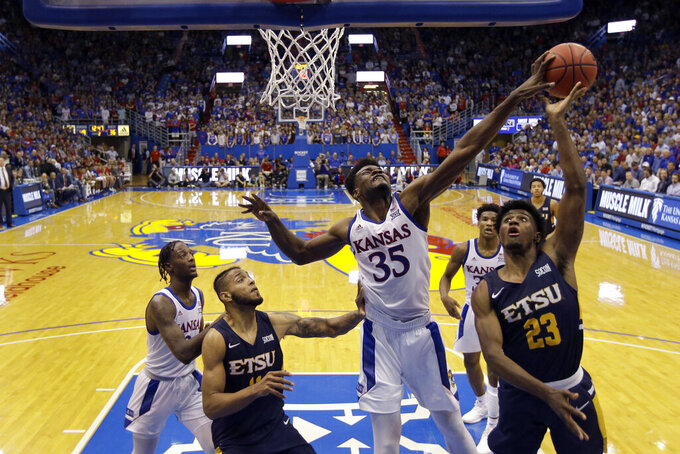 LAHAINA, Hawaii (AP) — Michigan State opened the season with a loss to Kentucky at Madison Square Garden. Kansas had a similar start on the same bill, losing to Duke.

Three weeks later, the third-ranked Spartans and fourth-ranked Jayhawks are in paradise, headlining another strong Maui Invitational field in a test to see how far they’ve come from those opening losses.

“This tournament lends itself to allowing teams to come much closer and experience these three games over here,” Kansas coach Bill Self said Sunday as waves from the Pacific Ocean crashed behind the tournament’s eight coaches.

The 2018 tournament had an epic finale, with Gonzaga holding off a late charge by Duke and Zion Williamson in a raucous atmosphere that shook the bleachers.

Michigan State and Kansas, the teams with the Hall of Fame coaches, top the marquee.

The Spartans were the preseason No. 1 but suffered a setback before their first game, losing guard Joshua Langford to a foot injury until at least January. Then, on Nov. 9, star guard Cassius Winston’s brother, Zachary, was hit by a train and killed.

Michigan State followed the loss to Kentucky with three straight wins, including an impressive road victory over No. 12 Seton Hall. The Spartans open against Virginia Tech in their fifth Maui appearance.

“It’s been an interesting year for us so far,” Michigan State coach Tom Izzo said. “Losing what I consider maybe our best two-way player in Josh Langford and then the tragedy with Cassius, we’re trying to figure out where we are, when we can practice.”

Kansas started to figure things out after the two-point loss to Duke. The Jayhawks have won their past three games by double digits, including a 112-57 blowout of Monmouth last week. The Jayhawks open against host Chaminade.

“We didn’t get off to a great start, have been a little bit better since then, but I like our guys,” Self said. “We have a good blend of veteran experience and youthful experience, so to speak.”

This year’s Maui bracket will include three teams in their first season under new coaches.

Two will meet in the opening round.

After a successful run at Cincinnati, Mick Cronin took over at UCLA this year, hoping to turn around a program that missed the NCAA Tournament last season after Steve Alford was fired. The Bruins opened with four straight wins but suffered an upset in their last game, losing 88-78 to Hofstra at home.

Pope was an assistant under Dave Rose, became the head coach at Utah Valley and returned to Provo when Rose retired after last season. The Cougars have wins over Houston and Cal State Fullerton but lost tight games against San Diego State and Boise State.

Mike Young was hired as Virginia Tech’s coach this year after Buzz Williams left for Texas A&M. Young took Wofford to the NCAA Tournament five times in his final 10 seasons there and has led to Hokies to five straight wins.

Among the players in Maui, Winston got the most preseason attention, earning preseason All-American honors and player of the year hype.

Two other players in Maui also may generate some buzz on the national stage.

Tom Crean made a huge impact at Georgia quickly, landing one of the nation’s top recruits in Anthony Edwards this year.

A 6-foot-5 guard, Edwards is a dynamic player who can shoot from distance, get in the lane and finish at the rim. He scored 29 points against The Citadel and is averaging 19.3 points per game.

Obi Toppin may not get the recognition he deserves playing at Dayton, but that could change in Maui. The 6-9 sophomore is one of the nation’s top power forwards, averaging 23.7 points and 9.7 rebounds this season.

Chaminade was not part of the main bracket last year after a format change. The Division II Silverswords are back in the main draw this year. Keep an eye on them.

Though usually undersized against DI opponents, they can shoot and have a knack for knocking off a bigger team in Maui every few years.