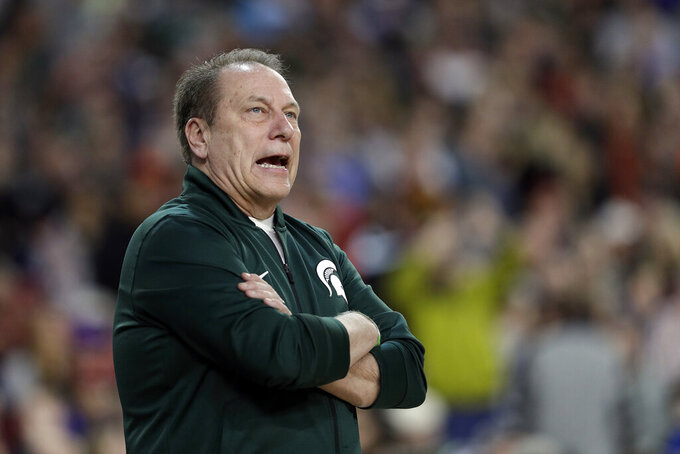 MINNEAPOLIS (AP) — Hunker down, hoops fans. This one might be ugly.

The Final Four's second semifinal Saturday features Texas Tech, the team with the best defense in a generation, against Michigan State, the nose-in-the-dirt team whose coach used to put helmets and shoulder pads on his players for practice.

It's a non-glamour pairing pitting two teams that thrive on the grind. Texas Tech (30-6) has allowed more than 70 points only five times this season and not at all in the tournament. Michigan State (32-6), with the ninth-best defense in the country, got here by shutting down more-talented, more-star-studded Duke.

The over/under on the game is 132.5, meaning there's a good chance the first team to 65 will win.

"We try to guard at a high level," Red Raiders coach Chris Beard said. "It's been the identity of our teams at all different levels, and currently at Texas Tech. It's something we try to recruit to. We certainly coach and emphasize it."

His players are listening.

Jarrett Culver is the team's leading scorer (18.9 points a game) and main NBA prospect, but the defensive help comes from all places. Matt Mooney and Tariq Owens were named to the All-Big 12 defensive team. Owens was also a semifinalist for the Naismith defensive player of the year. His swoop-in rejection of Rui Hachimura was the game-sealer in the Elite Eight victory over Gonzaga last week.

Texas Tech's defense has the best points allowed-per-100 possessions ratio (84) since stat guru Ken Pomeroy started tracking the figure in 2002. The Red Raiders have held teams to 36.9 percent shooting this year, second-lowest in the country.

"The defense, you don't know until you go out there," Michigan State guard Cassius Winston said. "You've got to feel it out, but it doesn't take that long to figure out what you can and can't do at this point."

Michigan State's defense isn't bad, either. It's built around the hard-nosed lessons coach Tom Izzo has been teaching for years. Back when Izzo was making his first of eight appearances in the Final Four, he would suit his players up in helmets and shoulder pads for rebounding drills.

Yes, the Spartans can be physical.

"This team isn't as physically tough, but they might be as mentally tough as any team I've ever had," Izzo said. "So the word 'toughness' is still there."

Guard Matt McQuaid is considered the team's best defender. In its media guide, Michigan State unfurls a long list of top players — including Purdue's big-scoring Carsen Edwards and pretty much all of the Big Ten — he has held under their season average. The Spartans were fourth in the nation in blocked shots (203) this season.

"This team is very connected," Izzo said. "It's like, when they move, they all move together, and that's why we've been pretty good defensively ourselves."

EIGHT IS ENOUGH: For all his trips to the Final Four, Izzo has only won it once. He says he does not take much solace in getting close a bunch of times.

"I talk to them all the time, and part of it's my fault because I say, 'You know, I've been there, and nobody can take that away from me, but my dream is for you guys to get there,'" Izzo said. "So if they get there, they're taking me along for the ride. So, that's why I still have bigger fish to fry and bigger things to go after."

NO DESSERT FOR YOU: Beard has been trying to teach his team self-sacrifice this season, asking all his players to give something up for the larger good of the team. Some said goodbye to Netflix; others took a break from social media; others have handed over their cell phones.

For Beard, it was beer, desserts and candy. One detail, though.

"Did you know a Pop-Tart is not a dessert? It's a breakfast. I've eaten a lot of Pop-Tarts since October," he said.

ANY TIPS: Culver had a fairly simple answer when asked how he would play 'D' on himself: "Pray."