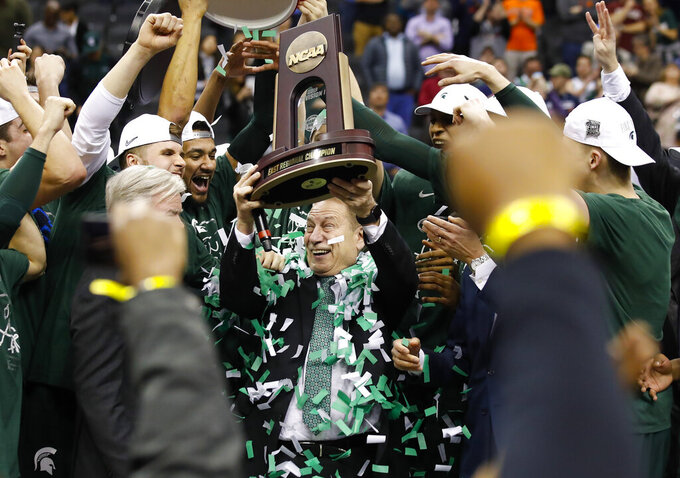 EAST LANSING, Mich. (AP) — Tom Izzo struggled with tears of joy as Michigan State knocked off top-seeded Duke to reach the Final Four. He was emotional again only a few hours later when fans packed the Breslin Center to welcome the gritty Spartans back to campus.

This season might be remembered as the best coaching job in Izzo's long career at Michigan State, reaching his eighth Final Four with a short-handed team that lost two underclassmen to the pros last year. It has also been an emotional time for the Hall of Fame coach.

Last season, some wondered if the Larry Nassar sexual abuse scandal and its deep ties to Michigan State would drive Izzo away as he answered questions about the behavior of some of his former players. Years ago, the Cleveland Cavaliers and Atlanta Hawks tried to lure him to the NBA and other college programs have taken runs at hiring him.

Each time there was a chance for him to go, Izzo stayed at the school that hired him as a part-time assistant in 1983 and promoted him to head coach in 1995.

And for that, he's thankful to still be on the banks of the Red Cedar River.

"There's nothing like this," Izzo told The Associated Press earlier this week while walking across his program's practice court. "I haven't been in the NBA Finals so I can't say I know everything. But the number of people you impact is off the charts here. If that many alums are that excited, it really does excite me and makes my day. That's why I coach. I coach for our players and our alums."

Izzo will coach one more game, and maybe two, to close out his 24th season in charge of a solid program he has turned into one of the best in college basketball. Second-seeded Michigan State faces third-seeded Texas Tech on Saturday night, playing for a spot in the championship game Monday night against the winner of the Virginia-Auburn game.

Izzo has led the Spartans to the Final Four for an eighth time, a total no coach or program can match since 1999.

He has cut down the nets on the biggest stage of all only once — and that drives him daily, if not every minute he is awake.

How would he respond to critics who say he needs another national title to validate his tenure?

"Five years ago, fire and brimstone in me would have wanted to fight that person," Izzo said. "Now I want to say, 'You're right.' I don't want to say it to get them off my back. I want to say it because if that's your goal for me, I promise you my goals are bigger than your goals for me."

Izzo desperately wants a second national championship to get in a club that currently has 15 coaches. Duke coach Mike Krzyzewski (five), North Carolina's Roy Williams (three) and Villanova's Jay Wright (two) are the only active coaches in college basketball with multiple national titles.

Izzo is in a much larger group of coaches with one college basketball title since the NCAA had its first championship game in the sport 80 years ago.

Michigan State was not expected to be in the hunt for a national title this season.

Miles Bridges and Jaren Jackson left last year as underclassmen and became NBA lottery picks, adding to the losses of a trio of role-playing seniors. The hits kept coming during the season, with Joshua Langford lost to a season-ending ankle injury, Nick Ward for some games late in the season with a broken hand and Kyle Ahrens with an ankle injury in the Big Ten Tournament.

The obstacles only seemed to motivate Izzo to work harder and get more out of the players he had left, including All-America guard Cassius Winston . The Spartans (32-6) shared the Big Ten regular-season championship, won the Big Ten Tournament and sent Krzyzewski's Blue Devils home. They are a win away from matching a school record for victories.

Izzo, who is from Iron Mountain in Michigan's upper peninsula, put down his guard long enough to enjoy a celebration last Sunday night with fans filling the school's arena.

"What I came back to the other night for me was, it just says it all, looking out there and seeing more people than in my hometown," he said.

Moments later and unprompted, Izzo referenced the Nassar turmoil that engulfed Michigan State last year and led to the exits of school President Lou Anna Simon and athletic director Mark Hollis, one of his best friends. The NCAA cleared the school of any rules infractions tied to the Nassar scandal.

"I think because we've been through a lot here, part of the process of people just expressing the platform we have and what it can do in a positive way," he said. "And if I can be a small part of that, that's as good as it gets."

Georgia's Tom Crean, who coached for and with Izzo at Michigan State, marvels at the job Izzo has done.

"With all the stuff they were dealing with from the scrutiny of the Nassar case last year and to have the personnel losses they had, I would say these last two years have been incredible," Crean said in a telephone interview. "It's hard for me to say this was his best year in coaching because he's had so many great years.

"But when you consider all he's had to deal with the last two seasons, it says so much about what he has built with that program and how he's built."

This story has been corrected to show Wright has won two titles.