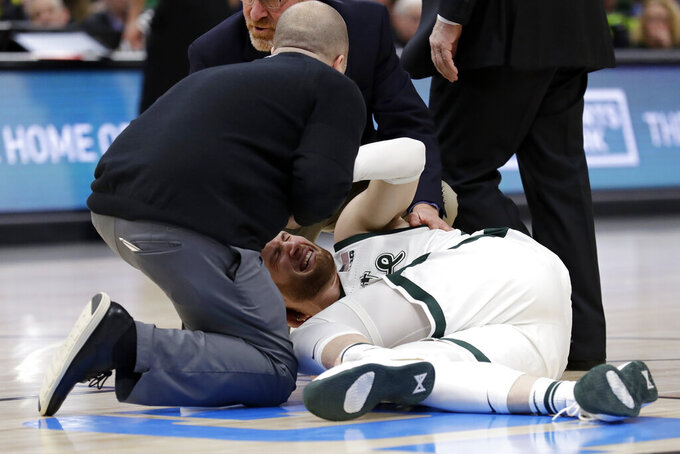 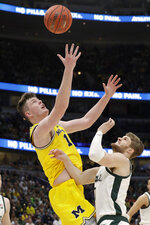 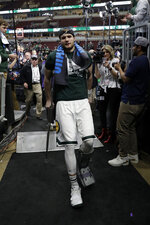 CHICAGO (AP) — Michigan State forward Kyle Ahrens injured his left ankle and was taken off the court on a stretcher Sunday, and his status was uncertain as the No. 6 Spartans headed to the NCAA Tournament.

Ahrens, a junior who was averaging 4.8 points per game, was hurt in the first half of Michigan State's 65-60 win over Michigan in the Big Ten Tournament championship game.

Ahrens said he was relieved X-rays showed the ankle was not broken, but the extent of the injury was not clear. He will have an MRI once the softball-sized swelling goes down.

The Spartans start the NCAA Tournament on Thursday against Bradley.

Ahrens landed awkwardly when he collided in midair with teammate Kenny Goins going for a defensive rebound with 4:34 left in the first half.

He clutched his lower left leg as he screamed in pain. Medical personnel placed an air cast on his leg and teammates gave him hugs before he was wheeled away, pounding his chest as he was taken to the back.

"He thought it was broke," coach Tom Izzo said. "He thought his career was over. He was thanking everybody. It was one of those times that you don't forget in your coaching career."

Ahrens returned to the sideline on crutches with just over 14 minutes left on the game. The crowd greeted him with loud cheers.

Ahrens suffered a season-ending leg injury as a junior in high school.