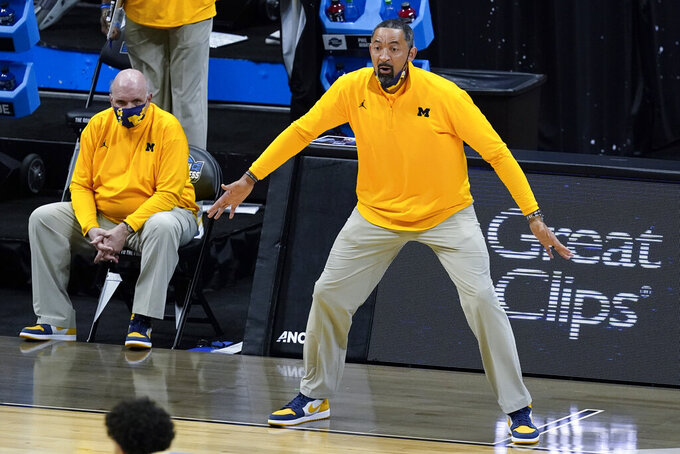 FILE - Michigan head coach Juwan Howard reacts to a play as associate head coach Phil Martelli watches from the bench during the first half of the team's Elite Eight game against UCLA in the NCAA men's college basketball tournament March 30, 2021, in Indianapolis. Martelli will fill in for Howard for the rest of the regular season. Howard was suspended five games and fined $40,000 by the Big Ten Conference after hitting a Wisconsin assistant coach in the head during the handshake line after a loss Sunday, Feb. 20. (AP Photo/Darron Cummings, File)

Howard resumed his role as coach on Monday after serving a five-game suspension for hitting a Wisconsin assistant in the head during a heated handshake line last month. His actions triggered players throwing punches, leading to Michigan's Moussa Diabate and Terrance Williams II being suspended for a game.

Howard met individually with players upon his return and led them in a practice on Tuesday for the first time since they were preparing to play the Badgers more than two weeks ago. He also put them through a practice Wednesday, preparing to play Indiana in the Big Ten Tournament.

After Wisconsin beat the Wolverines 77-63 on Feb. 20, Howard threw his right hand and struck assistant Joe Krabbenhoft's head after exchanging heated words and having some contact with head coach Greg Gard in the handshake line.

During his postgame news conference in Wisconsin, Howard said he didn’t like the Badgers calling for a timeout with 15 seconds left and them leading by 15. Howard also said, “I felt it was time to protect myself," when someone from Wisconsin put hands on him.

It didn't take Howard long to know he did not strike the right tone.

“When I got back on the bus, I was upset with how I conducted myself during that moment in the press conference," Howard said as he answered questions for the first time since the night of the melee.

Howard said he is seeking therapy, a move agreed upon with the school.

“I’m still hurting but most importantly, I want to take time to apologize again," he said.

The Wolverines went 3-2 with coach Phil Martelli filling in for Howard, finishing the regular season 17-13 overall and 11-9 in the Big Ten.

Howard will be back on the sideline Thursday in Indianapolis, leading the eighth-seeded Wolverines against ninth-seeded Indiana in the conference tournament quarterfinals in a matchup of teams on the NCAA Tournament bubble.

“I know there’s gonna be a big microscope on me every time that I coach," he said.