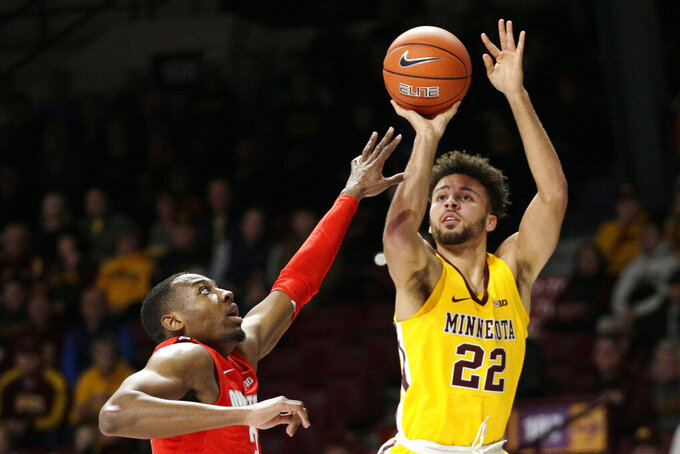 MINNEAPOLIS (AP) — With an eight-day break between games, Ohio State coach Chris Holtmann was wary of this trip to Minnesota despite the roll his team had been on.

The third-ranked Buckeyes had the kind of flat performance Holtmann was worried about, and — Poof! — their perfect record was gone, thanks to an all-around effort by the Gophers.

Marcus Carr scored a career-high 35 points and Daniel Oturu had 14 points and 13 rebounds, and Minnesota toppled undefeated and third-ranked Ohio State 84-71 on Sunday for coach Richard Pitino's first win against a top-five team.

“I thought we had some inconsistencies to our practice week,” Holtmann said. “You're not always sure if that's due to finals or whatever. Obviously, it was a significant layoff, but I don't look at that as the reason that we lost. They were the better team tonight.”

Oturu outworked Kaleb Wesson in the paint to win the battle of two of the Big Ten's best big men with his sixth double-double of the season for the Gophers (5-5, 1-1). Prior to this game, the highest-ranked opponent they'd beaten in seven years under Pitino was No. 6 Maryland on Feb. 18, 2016. Minnesota beat the Buckeyes' average scoring allowance by 30 points. That was fifth in the nation entering the game.

“I don't know if there was a weakness in what we did,” Pitino said. “I just thought start to finish that was about as complete a game as we've played here.”

Carr stole the show with 28 points in the second half, but it took a collective increase in aggression by him and fellow guards Gabe Kalscheur and Payton Willis after a 20-point loss at Iowa when the three of them combined for 10 points on 3-for-29 shooting.

“We definitely had an emphasis on coming out here tonight and re-establishing what we want to do and the kind of team that we want to be going forward,” Carr said.

Carr, who's in his debut with the Gophers after sitting out last season following a transfer from Pittsburgh, shot 12 for 17 from the floor after going 1 for 10 against the Hawkeyes.

“This is acting like a coming-out party for him,” Oturu said, “and people should start taking notice.”

The last time the Gophers beat a top-five foe was No. 1 Indiana on Feb. 26, 2013, under coach Tubby Smith. They were swarmed by their fans at midcourt after the clock ran out on Sunday.

Ohio State became the latest team at or near the top of the Associated Press poll to fall in what has been a wild first six weeks of the college basketball season.

“And I went ahead and said, ‘We can beat any team in the country,’” Carr said. “I know we haven't been playing like it. I know we didn't start out the season like we wanted to, but at the end of the day me and my guys and the coaches, we all have that belief in each other.”

Freshmen D.J. Carton (19 points) and E.J. Liddell (14 points) had season highs off the bench for the Buckeyes (9-1, 1-1), but Wesson had just 12 points and six rebounds with his playing time limited by foul trouble. He went 4 for 13 from the field and had six turnovers.

“We weren’t physical enough. We weren’t the more ready team, and we got beat,” his brother Andre Wesson said. “We can either learn from it or put our heads down and keep doing this, but we’ll be ready.”

Kaleb Wesson picked up his fourth foul at the top of the key for an illegal screen, lowering a shoulder into Kalscheur with 13:47 to go. Then Carr swished a 3-pointer for a 53-37 lead. The Buckeyes came as close as nine points down the stretch with less than four minutes left, but Carr answered with a three-point play after a drive in traffic drew a foul on Andre Wesson to push the lead back to 72-60.

Minnesota caught a big break with the absence of Ohio State's second-leading scorer and best 3-point shooter Duane Washington Jr., who didn't dress for the game because of a rib injury. Washington went 8 for 14 from 3-point range over the previous two games.

“His absence obviously leaves a scoring vacancy, but I don't think it was ever really one of those games where it was within reach enough,” Holtmann said.

Ohio State: The Buckeyes squandered the opportunity to take one of the top two spots in the next AP poll, after No. 1 Louisville lost to Texas Tech earlier in the week. The last remaining unbeaten team in the Big Ten, the Buckeyes took the nation's best scoring differential, an average margin of 26.2 points per game, into the night. They let the Gophers shoot 57.1% from the field in the second half.

Minnesota: A rough early schedule with six high-major nonconference opponents sure seemed to pay off with this performance. The Carr-Oturu tandem has showed the potential to be one of the best outside-inside duos in the league, if the guards can maintain some consistency.

Ohio State: The Buckeyes return home to face Southeast Missouri State on Tuesday. Then they head to Las Vegas to face Kentucky. The Wildcats will be their third top-10 opponent of the season, in terms of ranking at the time of the game.

Minnesota: The Gophers have a six-day break from competition for final exams, before a sort-of-neutral-site game on Saturday against Oklahoma State in Tulsa, a 1-hour drive for the Cowboys from campus.