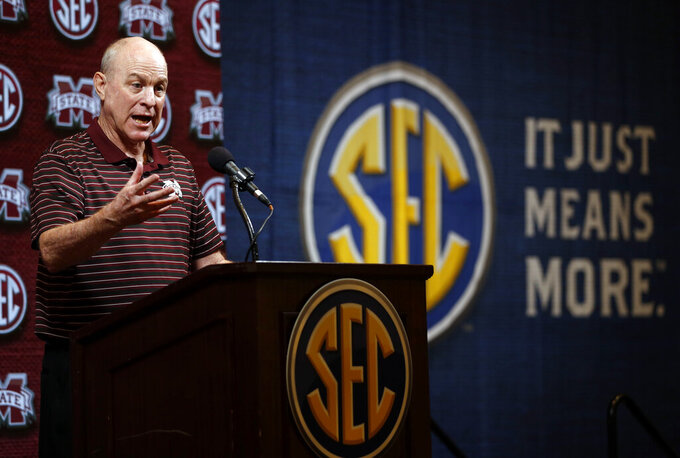 STARKVILLE, Miss. (AP) — After earning its first NCAA Tournament invitation in a decade one year ago, Mississippi State returns a veteran lineup as it chases a second straight bid.

The Bulldogs finished 23-11 last season and posted a 10-8 mark in the SEC, good enough for a sixth-place showing in the league and a No. 5 seed in the NCAA Tournament.

"I'm really excited about this year," Mississippi State coach Ben Howland said. "I think we have a very good nucleus returning from last year's NCAA Tournament team. Our players had a tremendous summer."

Headlining that nucleus is sophomore forward Reggie Perry. The preseason all-SEC selection averaged 9.7 points and a team-best 7.2 rebounds a year ago. Perry originally declared for the NBA draft but opted to return to school for his sophomore season.

Carter is the team's leading returning scorer after averaging 10.4 points a year ago.

"Tyson is poised to have his best year as a Bulldog going into his senior season," Howland said. "He's so much quicker and stronger than he was. He's playing with a lot of confidence."

Mississippi State does have some holes to fill.

Quinndary Weatherspoon, who had a team-high 18.5 points per game last season, was drafted by San Antonio in the second round. The Bulldogs also must replace Lamar Peters at point guard and forward Aric Holman.

"We lost a lot a lot on the offensive end," Howland said. "But I think we have a number of guys who can get their own."

Some other things to know heading to Mississippi State's 2019-20 season:

Junior point guard Nick Weatherspoon was suspended for Mississippi State's final 10 games of the 2018-19 season due to what school officials described as a violation of team rules.

That suspension will carry over to this season. Weatherspoon, the younger brother of former MSU standout Quinndary Weatherspoon, will have to sit the first 10 games of the season to conclude his penalties. His season debut is expected to be against New Mexico State on Dec 22.

While Weatherspoon serves the remainder of his suspension, Carter is expected to be the starting point guard for the first 10 games of the season.

Perry already has reeled in several preseason honors and is coming off an impressive summer. Perry was tabbed preseason first-team All-SEC by the league's media, joining Erick Dampier as the school's only sophomores ever to earn that honor.

Perry played with the Team USA U19 squad in the 2019 FIBA World Cup this summer. He averaged 13.1 points in that event to earn MVP honors and help lead Team USA to the gold medal.

A couple of players who redshirted last season should make impacts this year.

DJ Stewart is expected to be a starter at shooting guard to open the season. Stewart likely will move to a reserve role when Nick Weatherspoon enters the lineup.

Sophomore center/forward Prince Oduro redshirted last year after transferring from Siena. Oduro is expected to be the primary backup to Ado.

The Bulldogs also have four true freshmen on the roster this season, led by guard Iverson Molinar.

Carter, Perry and Woodard all have fathers who played at Mississippi State.

Carter is the son of former all-SEC standout Greg Carter, who helped lead Mississippi State to the 1991 SEC championship. Robert Woodard Sr. played for the Bulldogs in the mid-80s. Perry is the son of Al Perry, who once recorded 17 assists in a game, which remains the school's single-game record.

The Bulldogs will have a few tests before entering SEC action this season, and there will be plenty of battles within conference play alone.

Mississippi State also will participate in the Myrtle Beach Invitational in Conway, South Carolina, an event that features possible matchups with No. 10 Villanova and Utah. The Bulldogs open the 2019-20 campaign at home against Florida International on Nov. 5.