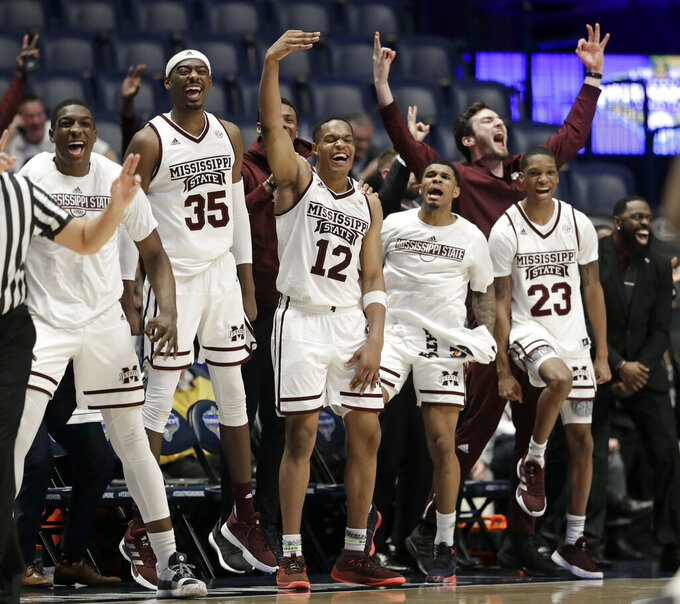 Mississippi State players celebrate after a score against Texas A&M in the second half of an NCAA college basketball game at the Southeastern Conference tournament Thursday, March 14, 2019, in Nashville, Tenn. Mississippi State won 80-54. (AP Photo/Mark Humphrey) 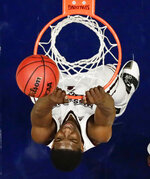 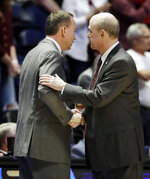 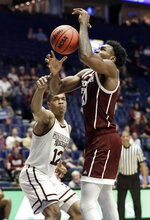 NASHVILLE, Tenn. (AP) — Lamar Peters' wrist is feeling much better, and now he's doing his best to help the Mississippi State Bulldogs burnish their resume before the NCAA Tournament.

Peters scored 15 points, and Mississippi State routed Texas A&M 80-54 Thursday night in the second round of the Southeastern Conference Tournament.

Mississippi State coach Ben Howland said Peters has only been able to practice shooting the past 10 days after a sprained wrist in a loss Jan. 29 at Alabama affected the junior guard in a number of games and kept Peters from shooting even at practice for nearly three weeks. That limited Peters to only three double-digit games until the regular season finale.

"Shooting a lot of it's about confidence," Howland said of his guard.

Peters credited his improved shooting to simply staying in the gym and practice shooting after practice.

"It's been paying off," Peters said.

The Bulldogs (23-9) now have won seven of their last nine with their second win over Texas A&M in six days. Mississippi State beat the Aggies by 92-81 in Starkville to wrap up the regular season, and their first game ever in this tournament was never that close as the Bulldogs never trailed.

Sixth-seeded Mississippi State now will play No. 8 Tennessee for a second straight year in the quarterfinals Friday night in another rematch from the Bulldogs' final week of the regular season. Tennessee won that game 71-54 in Knoxville and also knocked Mississippi State out of the tournament last year.

No. 11 seed Texas A&M (14-18) finished up a painful season that only got worse when sophomore guard TJ Starks dislocated a shoulder Feb. 26 in a loss at LSU. Starks not only averaged 12.3 points a game, he also led the Aggies in assists. His injury left Texas A&M coach Billy Kennedy with seven scholarship players, and this loss likely was the last of his eight-year career after reports he will be fired once the season ends.

Kennedy said he wish he knew but hasn't talked to any administrator yet.

"When you hear something as you walk into the gym and you hear it off the internet, that's not the way you want to hear something like that going into a tournament trying to play for a championship or trying to win games in the SEC," Kennedy said. "It's an unfortunate situation, but I'm not sure."

Savion Flagg led Texas A&M with 21 points and 10 rebounds a night after scoring a career-high 29 points. Brandon Mahan had 10.

Peters opened the game with a 3 for Mississippi State, and Weatherspoon added a 3 as the Bulldogs built a double-digit lead within the first six minutes at 15-4 on a 3-point play by Abdul Ado. From there, the Bulldogs just kept padding the lead to as much as 17 late before Flagg scored on a fast-break layup to trim the halftime margin to 38-23.

It only got worse in the second half where the Bulldogs' biggest issue was a warning to coach Ben Howland to get back inside the coach's box. Robert Woodard II finished off a 3-point play to push Mississippi State's lead to 50-30 with 14:21 to go, and the Bulldogs pushed the lead to as much as 30 on a 3-pointer by Peters with 4:06 left.

Texas A&M: Kennedy had a very young team this season with 10 players either sophomores or freshmen. Flagg led the Aggies in both scoring and rebounds this season as a sophomore. The Aggies now are 3-7 all-time in the SEC tournament. Kennedy said it was easy to see the difference in personnel, experience and physicality in the first five minutes.

"It's been a grueling season, playing six or seven guys and playing a couple of guys 40 minutes a game," Kennedy said. "It wears on you. It just has been that type of year. Last night we played really well, played with a lot of energy. Tonight we weren't razor sharp. You can't win at this level and in this league with the type of teams we're playing against if you're not at your best. If you're not at full strength, it's hard to win."

Mississippi State: The Bulldogs dominated the undermanned Aggies, especially inside. They outrebounded Texas A&M 38-24 and had a 36-18 scoring edge in the paint.

"We knew we couldn't let up on defense," Carter said. "That's what we did last time we played them, kind of kept the game a little closer than it should've been. We knew we just had to kind of step on their neck a little bit and just keep getting stops."

Mississippi State: Quarterfinal against No. 8 Tennessee on Friday night.