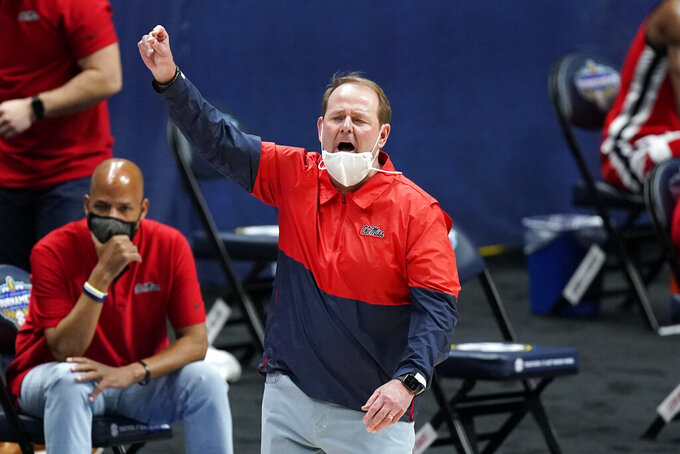 FILE - Mississippi head coach Kermit Davis yells to his players in the first half of an NCAA college basketball game against LSU in the Southeastern Conference Tournament in Nashville, Tenn., in this Friday, March 12, 2021, file photo. Davis is hoping a different style leads to more points, more possessions and more wins. The Rebels relied heavily on defense last season with one of the Southeastern Conference's stingiest and lowest scoring teams. The formula was only good enough for a 16-12 record and NIT berth. (AP Photo/Mark Humphrey, File)

“Starting with his first season when he was SEC coach of the year, coach Davis has increased the expectations of Ole Miss basketball,” Carter said in a statement.

Davis has led the Rebels to two postseason appearances in his first three seasons. The 2020 postseason was canceled because of COVID-19.

Davis originally signed a four-year contract that paid a base salary of $2.5 million annually when he was hired in 2018. He received a new deal in March 2019.

Ole Miss was a No. 1 seed in the NIT before falling in the first round last season. The Rebels made the NCAA Tournament in his first season after being picked to finish last in the Southeastern Conference, and Davis was named the league's coach of the year.

“I’m very proud of what we are building here on and off the court, and I am extremely excited about this year’s team,” Davis said.