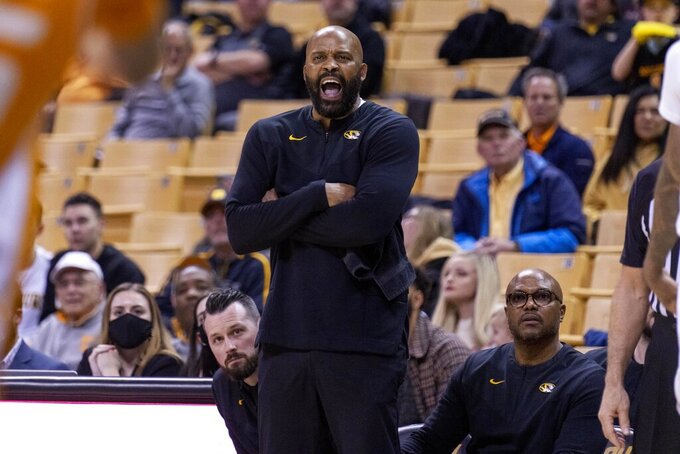 Missouri coach Cuonzo Martin talks to the team during the second half of an NCAA college basketball game against Tennessee on Tuesday, Feb. 22, 2022, in Columbia, Mo. Tennessee won 80-61. (AP Photo/L.G. Patterson)

KANSAS CITY, Mo. (AP) — Missouri fired basketball coach Cuonzo Martin on Friday night, one day after the Tigers finished a 12-21 season with a 76-68 loss to LSU in the second round of the Southeastern Conference Tournament.

Tigers athletic director Desiree Reed-Francois said in a statement that the search for a new coach would begin immediately, and that longtime coach and administrator Eddie Fogler would assist in the process.

It will be the first major coaching hire at Missouri for Reed-Francois, who was hired by by the school in August.

“Coach Martin represented the university with an extremely high level of class and dignity," Reed-Francois said. “We are grateful for his contributions to our program, on and off the floor. He is not only a coach, but is a teacher, and he has impacted the lives of every student-athlete who came through the program over the last five years."

The firing may prove to be popular among Missouri fans that have pined for a winning program but years. But it was met with widespread scorn from the basketball community, and not just for what transpired on the court.

“I’ve got two adopted black grandchildren, and I called him one day and said, help me through this. Tell me what I need to know as a grandfather,” Tennessee coach Rick Barnes said Friday night. "My daughter was having some issues that she wanted an answer to, and Cuonzo’s wife talked with my daughter, and so I look at him in a whole different light.”

Kansas coach Bill Self lamented another coaching change involving one of the Jayhawks' biggest rivals. Kansas State coach Bruce Weber resigned on Thursday, though he likely would have been fired if he hadn't stepped down.

“I know schools and businesses have to make decisions that are sometimes hard to make and are sometimes unpopular, or sometimes they do it because it is popular,” Self said, “but that's two coaches in the last two days at our biggest rivals.

Martin was hired fire years ago following the failed three-year tenure of Kim Anderson, promising to bring an exciting style of play along with high-level recruits. But most of those recruits, such as Michael Porter Jr., struggled with injuries and the pieces never seemed to come together in Columbia, where Martin had a record of 78-77.

“I’m going to let the chips fall where they may,” Martin added, “but I have a tremendous peace of mind, and I’m going back to the hotel to relax with my family and then go from there.”

Martin certainly had support from many of his rival coaches, including South Carolina's Frank Martin.

“Last time I checked they went to the NCAA Tournament last year, if I’m not mistaken,” he said Thursday. "I don’t know what this business is coming to when men like him get questioned on what they can and can’t do, and get judged this year in this league coming off the year he had last year. We got major issues in this business if somebody that had that team top 20 in the country pretty much all season last year and went to the NCAA tournament (gets fired).

After stints at Missouri State, Tennessee and California, Martin's best season with Mizzou was his first, the 2017-18 season, when Porter led the Tigers to a 20-12 record and the first round of the NCAA Tournament. They went 15-16 the following season, when they were ineligible for postseason play, and 15-16 during the COVID-19-shortened 2019-20 season.

They finally returned to the NCAA Tournament last season, squeaking into the 68-team field with a 16-9 record, but were edged by former Big 12 rival Oklahoma in their first-round matchup.

Missouri has struggled to find success since the retirement of beloved coach Norm Stewart.

Quin Snyder had a few good years — including an Elite Eight appearance — that were ultimately tainted by controversy, and he went 12-16 during his final season in Columbia. Mike Anderson took the Tigers to the Elite Eight but left Missouri in a lurch when he departed for Arkansas. And Frank Haith also courted controversy during his up-and-down tenure.

If nothing else, Martin led the program with grace and class though widespread social unrest on campus, including protests during the Black Lives Matter movement that came to be defined by the football and basketball programs.

“Cuonzo is a stand-up guy, one of the best in our business. ... Whether it’s on the court or away from the court, he is about social justice, making sure that he has a big voice, not only as a college basketball coach, but just as a Black man in America,” Vanderbilt coach Jerry Stackhouse said.

“He steps into the forefront a number of times when we’re dealing with a lot of stuff with George Floyd and everything that happened over the past couple of years,” Stackhouse added. “ He has been one of those guys that is always leading the charge.”

Martin just didn't win enough games in a business where that is usually the bottom line.

“I believe that Mizzou is one of the best men’s basketball coaching jobs in the country,” Reed-Francois said in her statement. "We have and will continue to invest in our men’s basketball program, and I look forward to introducing the new leader of our program to our community in the near future. We will work quickly and expeditiously to find the candidate who is the best fit to continue building our championship culture.”