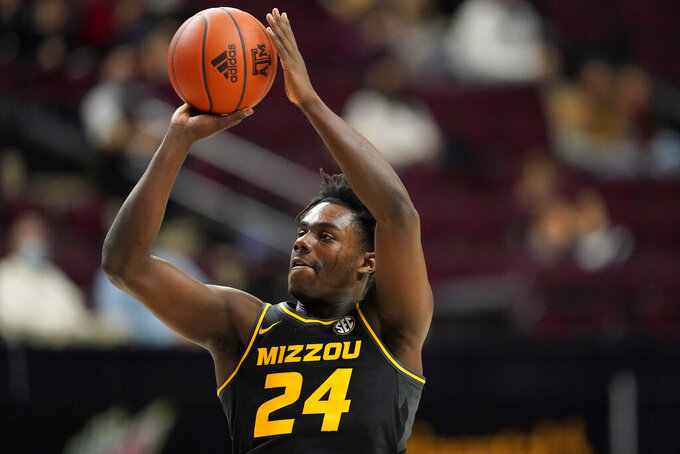 FILE - In this Jan. 16, 2021, file photo, Missouri forward Kobe Brown shoots against Texas A&M during the first half of an NCAA college basketball game in College Station, Texas. Brown and Javon Pickett are the only Tigers who played regular minutes last year. (AP Photo/Sam Craft, File)

COLUMBIA, Mo. (AP) — There have been so many changing faces within the Missouri basketball program since the end of last season that coach Cuonzo Martin thought it would be a good idea to gather the guys at his house over the summer.

It would have been a good idea to wear name tags.

Their top four scorers have left with Dru Smith and Jeremiah Tilmon graduating, Xavier Pinson transferring to LSU and Mark Smith heading across the border to Kansas State. Drew Buggs also entered the transfer portal and wound up at Hawaii, and that left Kobe Brown and Javon Pickett as the only Tigers who played regular minutes last year.

“We do it every summer,” Martin said of the offseason gathering at his crib, “probably twice in a month. This time we did it the first four weeks, without question, and that was scripted, just so our guys could be around our families and around our staff just in building relationships.”

Such is the nature of college basketball these days: The Tigers hit the transfer market to replenish the roster.

Dajuan Gordon probably waved at Mark Smith as they crossed paths with the former Kansas State guard headed to Columbia. Ronnie DeGray III arrived from UMass, Boogie Coleman from Ball State and Amari Davis from Green Bay, giving the Tigers an instant influx of veterans — even if they hardly know each other.

The Tigers also brought in a talented recruiting class headlined by guard Anton Brookshire, forwards Yaya Keita and Trevor Brazile and Kaleb Brown, the 6-foot-6 brother of Kobe Brown who should be intimately familiar with the program.

Asked what his new-look team needed to work on most, Martin replied: “There's a lot of things.”

Kobe Brown, the Tigers' junior forward, is the top returning scorer after averaging 8.0 points last season. But he showed some scoring potential with a 21-point outburst against Georgia in the regular season and a 16-point, seven-rebound game against the Bulldogs in the second round of the SEC Tournament.

Davis averaged 15.9 points two years ago and 17.2 last season, though the competition he faced with Green Bay will be much different than in the SEC. DeGray and Coleman will experience the same step up in class. But in Gordon's case, he started 22 games and averaged 9.1 points and 5.5 rebounds against Big 12 opposition for Kansas State.

Martin's teams have a track record of toughness and defense, but he's hoping the Tigers this year have another easily identifiable trait: speed. Martin wants to see them get up and down the floor much faster than last season.

“We’re working on it, no doubt," he said. "As fast as you can go, almost running through that wall. We want to go fast. You want to be fast, but you want to be efficient. You still have to take care of the basketball. We work toward that every day.”

The Tigers eschewed a normal exhibition game against a lower-tier college program in favor of closed scrimmages to help prepare for the season. Martin prefers that route because he can better script what happens during the workouts.

“You can play three quarters, you can play 10 minutes this possession, you can do whatever you want to do,” Martin said, “and guys can kind of let their hair down, so to speak. You don’t have to be guarded — ‘We got to win this game.’ Sometimes even an exhibition, somebody has to win and you don’t really get a chance to get better like a closed scrimmage.”

There are plenty of potholes in the nonconference schedule for Missouri: SMU and Wichita State are talented, Utah and Illinois are high-profile games, and there's the return of the Border War against Kansas to look forward to this December.

“It’s a tremendous schedule,” Martin said. “and I’d be hard pressed to find ten better in the country. In selling you want to come here and play, that’s part of it to, have a quality schedule.”