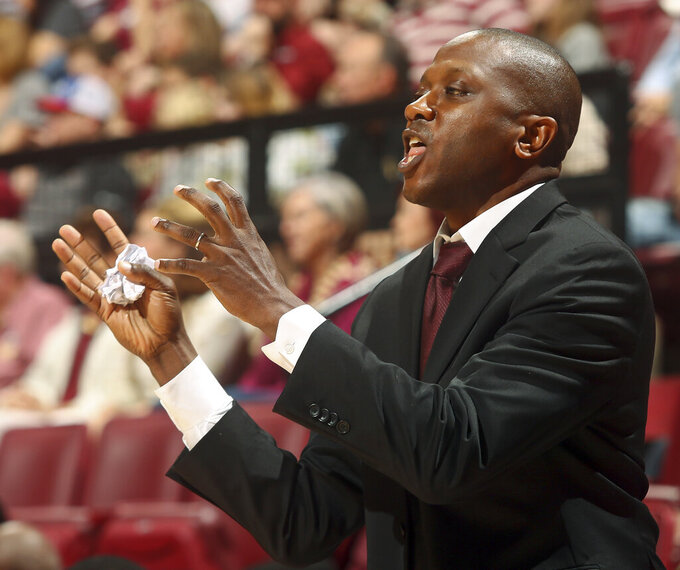 FILE - Florida State assistant coach Dennis Gates directs his team in the second half of an NCAA college basketball game against Winthrop in Tallahassee, Fla., Tuesday, Jan. 1, 2019. Missouri is hiring wildly successful Cleveland State coach Dennis Gates to help rebuild a long-floundering program that has churned through seven head and interim coaches since Norm Stewart prowled the sidelines in Columbia. The university's Board of Curators approved Gates' hiring on Tuesday, March 22, 2022. Gates spent time at Florida State and Marquette as a graduate assistant before stints on the bench at California, Northern Illinois, Nevada and alongside Leonard Hamilton at Florida State. (AP Photo/Phil Sears, File)

Dennis Gates was a young standout at Chicago's Whitney Young High School and mulling college scholarship opportunities when Norm Stewart, late in his coaching career, tried to persuade him to play point guard for Missouri.

Gates was impressed by Stewart's pitch that day but ultimately signed with California.

More than two decades later, Gates will be the one soon sitting across from Missouri recruits in living rooms.

The 42-year-old Gates was hired to replace the fired Cuonzo Martin on Tuesday, tasked with rebuilding a lfloundering program that has churned through seven head and interim coaches since Stewart prowled the sideline in Columbia.

Gates is coming off a wildly successful rebuild at Cleveland State, where he inherited a program that won just 11 games in 2019 and engineered one of the biggest turnarounds in Division I basketball. The Vikings went 19-8 and reached the NCAA Tournament last season, then went 20-11 and lost in the first round of the NIT this season.

“I left a special place for a special place,” Gates said during an introductory news conference, where he praised mentors such as George Raveling and Leonard Hamilton. “An unbelievable institution from an academic standpoint, but also being a flagship Power Five institution in this state — it's only us — that means something. That means a lot.”

One of the up-and-coming coaches in college hoops, Gates signed a revised contract in May 2021 that paid him $550,000 a year and made him the highest-earning coach in the Horizon League. Gates will be paid far more handsomely by Missouri, though, which gave Martin a seven-year contract that guaranteed him $21 million total.

With boundless energy and natural charisma, Gates vowed that “one day we will cut down nets. Hold up trophies. We will raise banners. I will one day sit in the green room with a first-round draft pick.”

Gates is the first significant hire by athletic director Desiree Reed-Francois, who arrived at Missouri in August. She replaced Jim Sterk, who fired Kim Anderson in 2017 and hired Martin as his replacement.

“After a comprehensive and efficient national search, during which we had the privilege of speaking with an impressive group of coaches, it became clear Coach Gates was what we needed in the next leader of our basketball program,” Reed-Francois said. “He’s smart, driven and focused on winning. He’s a proven recruiter, a strong evaluator of talent, an innovative teacher of the game and has a unique enthusiasm and passion for his work and for his student-athletes.”

The pressure is on for Reed-Francois's move to work out. Her decision to fire Martin, who was 78-77 with the Tigers but had helped the basketball program — and the athletic department — navigate several years of social unrest on campus, was met with almost universal scorn from those within the close-knit college basketball coaching fraternity.

“Desiree Reed-Francois is focused on a results-driven, championship culture that supports our student-athletes,” Missouri president Mun Choi said. “We all agree Coach Gates fits into that vision and will take Mizzou basketball to new heights.”

Missouri has not won an NCAA Tournament game since 2010, a period of ineptitude that cost not only Martin and Anderson but also Frank Haith their jobs. The Tigers also went through years of scandal tied to Quin Snyder, and famously have never appeared in the Final Four, despite regular NCAA tourney trips during Stewart's long Hall of Fame tenure.

“I know the business and profession I'm in. I realize that," Gates said. “I'm not running from it."

Gates was a three-year captain for Cal before embarking on his coaching career, first as an intern for the Los Angeles Clippers. He spent time at Florida State and Marquette as a graduate assistant before stints on the bench at Cal, Northern Illinois, Nevada and alongside Hamilton at Florida State.

He helped to recruit lottery pick Jonathan Isaac and stars such as M.J. Walker and Terance Mann to Tallahassee.

“My mentors have prepared me for this moment,” Gates said. “Leonard Hamilton often moved to he side and allowed me to lead in moments that prepared me to be here, from the scouting to the responsibilities daily, to the interactions in our community. He allowed me to do that on his watch. That's why I thank him.”

Gates' wife, Jocelyn, was hired as a senior associate athletic director at Ohio State last summer. It's unclear whether she will remain there or if a job will be become available within the Missouri athletic department.