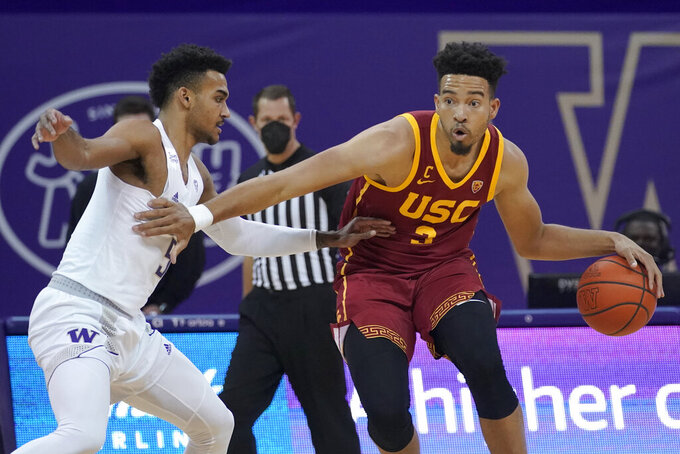 SEATTLE (AP) — Andy Enfield was already thrilled with what he was getting from No. 20 Southern California defensively for most of the Pac-12 season.

The Trojans have been even better at that end of the court for their past two victories.

Ranked for the first time since early in the 2017-18 season, the Trojans (16-3, 10-2) won for the 11th time in their past 12 games thanks to another stellar defensive performance and a dominant effort on the interior against the undersized Huskies.

USC held rival UCLA to 48 points in an 18-point victory last Saturday, then limited Washington to its second-lowest point total in conference play this season.

“Defensively, we were very good. I think you saw that midway through the first half into the second half, we challenged every shot made them shoot a low percentage,” Enfield said. “Then we dominated the paint on offense. I think this team it starts with the defensive end.”

The Mobleys were at the heart of USC’s fifth straight win, but they got help from others. Chevez Goodwin had 11 points of the bench and Tahj Eaddy added 10.

USC outscored Washington 46-22 in the paint and held a 41-24 advantage in rebounds. The Trojans missed their first six 3-point attempts before Eaddy’s 3-pointer with 3:18 left pushed the USC lead to 63-50. But the lack of perimeter shooting didn’t matter thanks to the dominance on the inside.

“We’re an inside-outside, inside game offense first. That’s where our big guys are hard to stop and then our guards when they make shots, we’re awfully good,” Enfield said. “Tonight, we didn’t have it going from the perimeter, but we made enough plays down the last 15 minutes to win the game.”

Quade Green led Washington (3-15, 2-11) with 16 points and it was a much better performance than the meeting last month in Los Angeles when the Huskies suffered a 27-point loss.

But scoring was a problem all night for Washington. The Huskies became the sixth straight team held under 70 points by the Trojans. USC entered the night with the second-best scoring defense in the conference, allowing less than 64 points per game.

Jamal Bey added 10 points, but the Huskies had just eight made field goals and nine turnovers in the second half.

“Offensively, I felt like we did a decent job it was just our turnovers. We just turned it over too much,” Washington coach Mike Hopkins said. “We don’t have a large margin for error. So maybe take away five turnovers, those become five 3-point shot opportunities, and now we’re in a real chance to pick them off.”

USC: Defense continues to be what carries the Trojans thanks to the towering presence of the Mobley’s on the inside. USC is now 82-5 in its past 87 games where its held its opponent under 70 points. USC has held 15 teams under 70 this season.

Washington: While the offense struggled, Washington’s defense was a little bit better against USC. The 69 points were the fewest allowed by the Huskies in their past 11 games.

USC: At Washington State on Saturday.