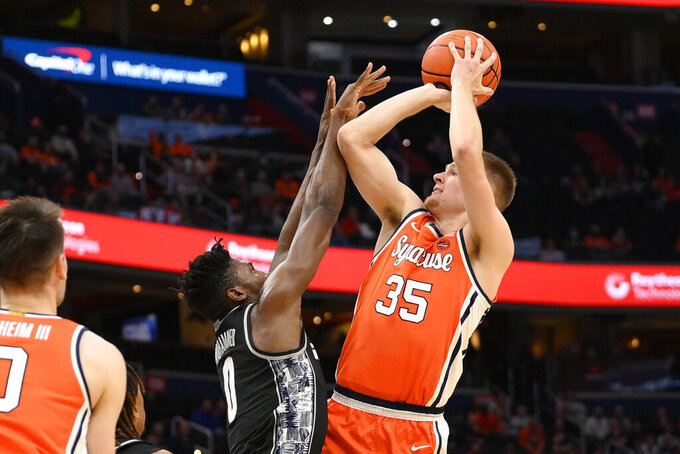 WASHINGTON (AP) — Aminu Mohammed had career highs of 23 points and 13 rebounds and Georgetown overcame a 10-point halftime deficit to beat Syracuse 79-75 on Saturday.

Mohammed, a freshman who also had a personal-best five assists, led an early second-half rally that gave the Hoyas (5-4) a lead and put the game away with two free throws with nine seconds left. He was 7 of 14 from the field and 8 of 9 at the free-throw line.

Donald Carey added 18 points with four 3-pointers, Kaiden Rice had 15 points on five 3s and Collin Holloway added 10 points off the bench, eight in the second half.

Syracuse's five starters average double figures and they did so again against their former Big East rivals. Buddy Boeheim had 17 points, Joe Girard 15, Jesse Edwards and Cole Swider 12 each and Jimmy Boeheim 10 for the Orange (5-5).

Mohammed scored 12 points in a 21-9 run to open the second half that Carey capped with a four-point play to give Georgetown its first lead of the second half, 55-53, with 11 1/2 minutes remaining. Rice hit a 3-pointer after seven straight misses from the arc to restore the Hoyas' lead with 1:11 left. Carey made two free throws then Girard scored but couldn't complete a three-point play with 10 seconds remaining. Mohammed grabbed the rebound and his free throws secured the win.

Rice hit three consecutive 3-pointers to give Georgetown a lead five minutes into the game before a 9-0 run capped by a Jimmy Boeheim 3-pointer put the Orange ahead midway through the half. Girard, who had 13 first-half points, hit a 3-pointer and Edwards added a bucket for a 44-34 lead at the break, the Orange's largest lead.