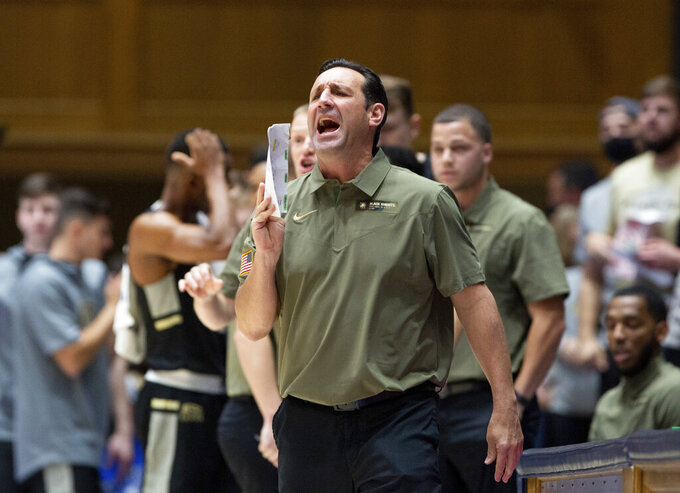 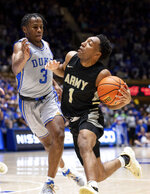 DURHAM, N.C. (AP) — Wendell Moore Jr. looked comfortable and confident as a veteran captain in Duke's home opener. It certainly helped having the ninth-ranked Blue Devils' famously rowdy fans packed in again for the first time in more than 20 months.

The junior forward posted only the third triple-double of the Mike Krzyzewski era to help Duke beat Army 82-56 in Friday night’s home opener.

“He's our leader," Krzyzewski said of Moore. "He'll do anything that we need to have done.”

Moore finished with just one turnover in nearly 35 minutes.

“It all starts with my teammates,” said Moore said, who needed IV fluids due to cramping after Tuesday’s season-opening win against No. 10 Kentucky in New York. “They have instilled so much confidence in me over this preseason. I feel like I can do anything with them behind me.”

Freshman Paolo Banchero added 18 points for the Blue Devils (2-0), who are beginning their final season under Krzyzewski. He announced in June that he would retire this spring and hand off to associate head coach Jon Scheyer, the former Blue Devils player who sat Friday to Krzyzewski's immediate right on the bench.

This game matched Krzyzewski against his alma mater and the program he led before taking over at Duke in 1980. Duke jumped out to a 10-0 lead and never trailed, but had issues putting away the pesky Black Knights (1-1).

Jalen Rucker scored 19 points to lead Army, which trailed by between seven and 15 points much of the way before the Blue Devils stretched it out beyond 20 points in the final 5 minutes.

Army: Picked to finish fourth in the Patriot League, Army hung around, both in turning away Duke’s mini-bursts but also in its inability to seriously cut into the deficit after halftime. The Black Knights shot 39% and made just 5 of 22 3-pointers, while committing 21 turnovers that led to 27 points for the Blue Devils.

Duke: The Blue Devils' season-opening win against the Wildcats in Madison Square Garden came behind big performances from freshman Trevor Keels and Banchero (22 points). Banchero followed with 12 rebounds, while Keels had 10 points and six steals.

This was the first regular-season game for Duke with the Cameron Crazies — the screaming and chanting-in-unison fans — jammed back into the courtside bleachers since the March 2020 win against rival North Carolina. That was five days before the COVID-19 pandemic shut down the sports world.

When college basketball resumed last season, Duke played its home games in largely empty Cameron Indoor Stadium. The Blue Devils lost five times, their highest total since losing six times in Cameron in 1995 — then ended up missing the NCAA Tournament for the first time since that same season.

“You run out the tunnel and there's not much going on (last year)," senior forward Joey Baker said. "Now we have the Cameron Crazies back, and they fuel our runs and help us on defense. Opposing teams, they feel them. So they help us out a ton. I think that's well-documented."

There was a curious moment during a first-half stoppage in which Krzyzewski walked near midcourt and started yelling toward Allen on the other sideline.

Allen then turned toward Rucker past midcourt and asked if he had said anything, with Rucker and Krzyzewski then appearing to talk at each other briefly from a distance.

Krzyzewski offered no details when asked about it afterward, saying it was “nothing.”

“There's nobody that has more respect for Coach K than our players,” Allen said. “He comes from our program. I think that was a situation where some guys on the floor were jawing a little bit at each other. And that was it, that was all that really happened there.”

Duke: Host Campbell on Saturday as host of the same weekend event.