Moore, No. 22 Villanova ride big first half past La Salle 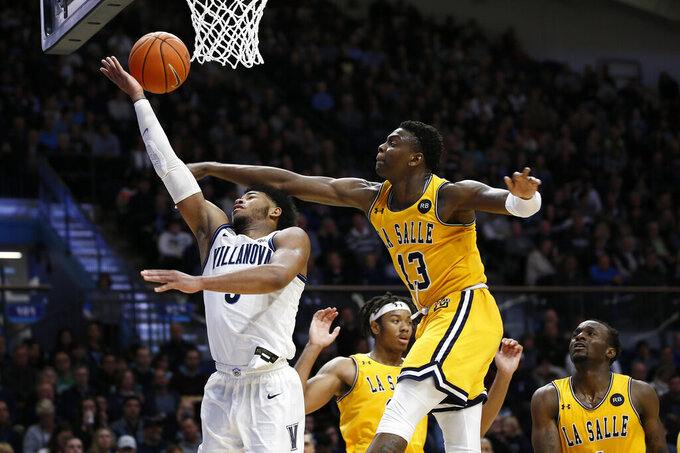 Villanova's Justin Moore, left, tries to get a shot past La Salle's Saul Phiri during the second half of an NCAA college basketball game, Sunday, Dec. 1, 2019, in Villanova, Pa. (AP Photo/Matt Slocum)

VILLANOVA, Pa. (AP) — Coach Jay Wright has a talented but inexperienced team at Villanova this year, capable of being dangerous and maddening — sometimes in the same game.

Justin Moore had 25 points off the bench, Saddiq Bey scored 19 and the 22nd-ranked Wildcats survived a sloppy second half to beat La Salle 83-72 on Sunday night.

“We’ve had different guys who have come up big for us on different nights,” Wright said. “It was Justin for us tonight.”

Villanova (5-2) went on a 28-6 run midway through the first half to build a 48-28 cushion at halftime. The Explorers closed within 10 twice in the second half thanks to some pesky defense that held the Wildcats without a field goal for over seven minutes. Villanova also committed 12 turnovers in the second half, helping La Salle hang around.

“They made better adjustments than us at halftime,” Wright said. “They played hard and we made mistakes that an inexperienced team makes. Juniors who haven’t been go-to guys and sophomores who haven’t been leaders. But they are learning.”

“I’m proud of the way that our guys battled,” said La Salle coach Ashley Howard, who was an assistant to Wright from 2013-18, a span that included two national titles. “We battled, but the first half we let the game get away from us with turnovers and poor transition defense.”

Moore scored 15 points in the first half to help Villanova build the lead. Bey and Jeremiah Robinson-Earl each had 10 rebounds.

“We have to learn how to come out and play hard for 40 minutes,” Moore said. “We had a great first half, but we have to match that intensity in the second half.”

Collin Gillespie contributed 14 points for the Wildcats, who have won seven in a row against their Philadelphia Big Five City Series rival and improved to 26-1 since 2012-13 against the four other Division I schools in the unique college basketball association. The only loss in that span for the Wildcats came on Dec. 11, 2018, to Pennsylvania.

La Salle: Coming off a tournament win at the Gulf Coast Showdown last week, the Explorers dropped a game against a Wildcats squad that has bedeviled them for almost 20 years. Still, they have enough talent to make noise in the Atlantic 10.

Villanova: The Wildcats could move up in the AP Top 25 thanks to a chaotic week for teams above them, but their second-half struggles showed they are hardly a complete team.