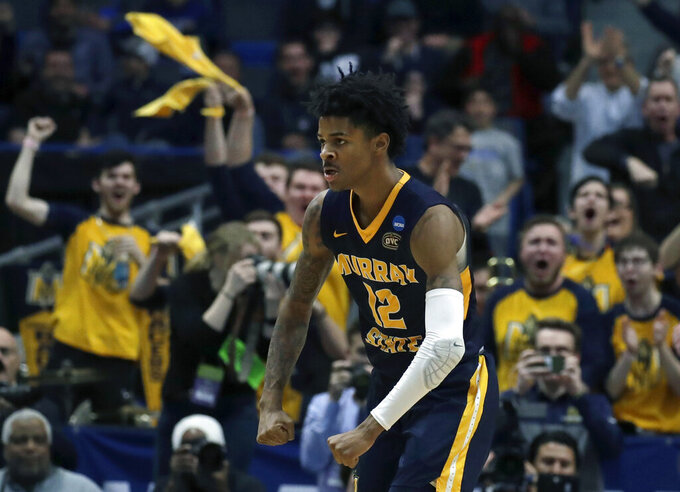 FILE - In this March 21, 2019, file photo, fans cheer as Murray State's Ja Morant (12) celebrates a basket during the second half of a first round men's college basketball game against Marquette in the NCAA Tournament, in Hartford, Conn. Morant was selected to The Associated Press All-America first team, Tuesday, April 2, 2019. (AP Photo/Elise Amendola, File)

Others on the team announced Wednesday are: Brandon Clarke of Gonzaga, Carsen Edwards of Purdue, Rui Hachimura of Gonzaga, Markus Howard of Marquette, De'Andre Hunter of Virginia, Ja Morant of Murray State, Grant Williams of Tennessee and Cassius Winston of Michigan State.

Barrett, Morant, Williams, Williamson and Winston have been invited to Los Angeles for the Wooden Award presentation at the College Basketball Awards on April 12.

Hunter and Winston will be playing with their teams in the Final Four this weekend.