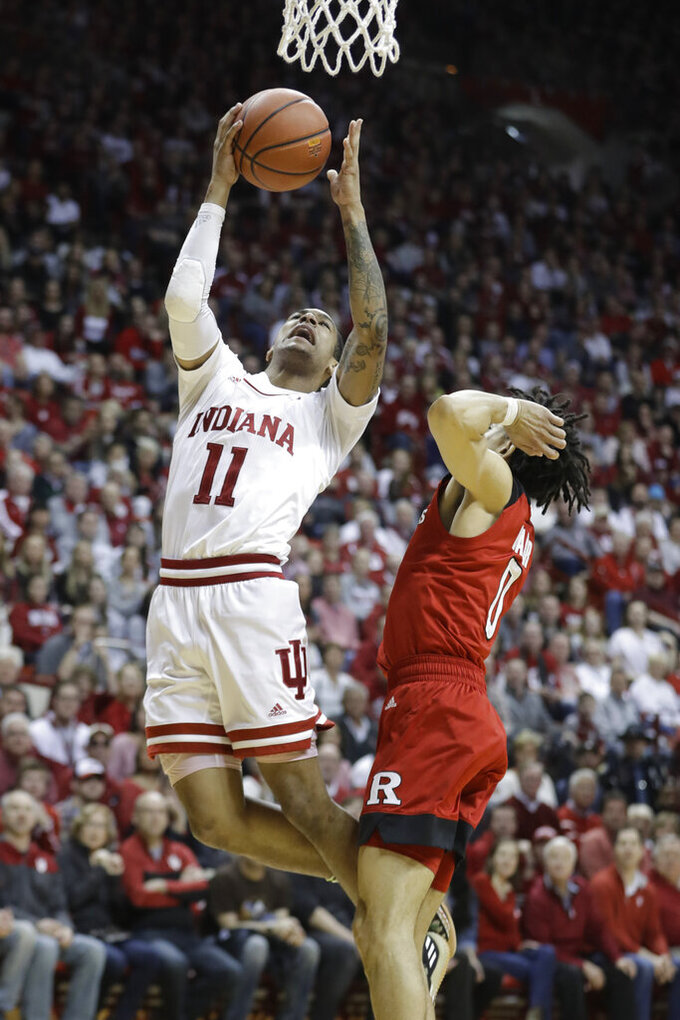 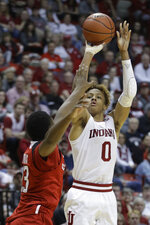 BLOOMINGTON, Ind. (AP) — While addressing a near-capacity home crowd on Sunday, Indiana senior Juwan Morgan turned to his family and teammates and thanked them.

Contemplating transferring as an underclassman, there was a time when Morgan wanted to leave Bloomington, take off the cream and crimson and walk away.

The Hoosiers are sure glad he decided to stay.

"I remember nights talking to my mom and dad," Morgan recalled. "About those times I wanted to transfer. I was tired of this place and things like that, but I had Zach (McRoberts), Devonte (Green) and De'Ron (Davis), they kept my head on straight a lot, and they basically talked me out of it."

Romeo Langford added 20 points and six rebounds while Green had 16 points for the Hoosiers (17-14, 8-12), who secured a first-round bye at the Big Ten tournament in Chicago.

Morgan shot 11 of 13 from the field and 2 for 2 from the foul line to post his second 25-point game this season. The forward was coming off a 20-point performance in Indiana's 92-74 victory against Illinois.

It was Indiana's fourth straight win after losing 12 of its previous 13 games.

"I thought we got off to a great start, and Juwan was terrific. He really gave us a cushion," Indiana coach Archie Miller said. "In the second half, again, Juwan was pretty much unstoppable in this game. He gave us a big boost to push that lead out to 23 and made it comfortable to work through the game."

Rutgers (14-16, 7-13) lost its second consecutive conference game and missed out on a chance at a first-round bye in the Big Ten Tournament, which starts Wednesday at the United Center.

The Hoosiers controlled the glass and shot over 50 percent in the first half to establish a double-digit lead by the 12:40 mark. Indiana shot 53 percent in the game and was 79 percent from the free-throw line at 23 of 29.

A 20-5 run by the Hoosiers led to a 16-point lead with 10:25 remaining in the first half and it was 46-36 by halftime. A 3-pointer by Morgan gave the Hoosiers a 20-point advantage in the second half before the margin reached 22 points after a Devonte Green layup with 11:06 remaining.

"Everything we want is in front of us, and we just have to take it one day at a time and one game at a time," Morgan said. "We're focused on getting better from today and taking that into tomorrow and so forth into the Big Ten Tournament. I think all the guys aren't taking things lightly."

Morgan has 1,295 points, 101 steals, 729 rebound, 147 assists and 132 blocked shots in his career with the Big Ten tournament and a probably postseason appearance ahead.

Rutgers: While Rutgers missed out on its eighth league win, which would have marked the first time since 2001-02 in the Big East, the Scarlet Knights achieved a program feat not seen in 13 years. ... Rutgers' seven league-game victories is the most since 2005-06.

Indiana: The Hoosiers needed a win on Sunday to break a three-way tie with both Rutgers and Illinois behind the league's top-8 programs. Indiana split its regular-season meetings with Rutgers and won its fourth straight conference game. ... The win secured a ninth seed for the Hoosiers in the conference tournament and a first-round bye.

Indiana will open the Big Ten tournament on Thursday in Chicago and their performance could have substantial NCAA Tournament invite implications.

Rutgers will play in the opening round of the Big Ten Tournament on Wednesday.