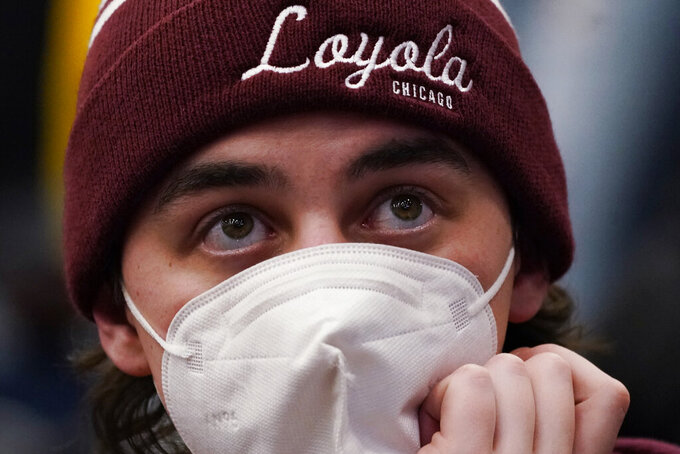 A Loyola Chicago fan looks at the scoreboard during the second half of an NCAA college basketball game against Missouri State in Chicago, Saturday, Jan. 22, 2022. (AP Photo/Nam Y. Huh) 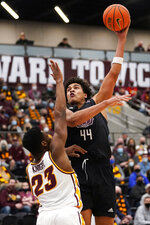 Braden Morris had 16 points and Lucas Williamson 11 for Loyola Chicago (14-3, 5-1), which had won 30 straight home games for the fourth-longest active streak in Division I.

“We just gave it to Isiaih Mosley, that’s pretty much handled all our shooting concerns,” Missouri State coach Dana Ford said. “He did a fantastic job getting to his sweet spots and playing off two feet. Our guys did a good job getting it to him. They knew he had a hot hand and instead of trying to do other things, we just kind of rode the way with him.”

“That middle of the game, we lost discipline, and I thought it was because we were missing shots, and it transferred over to our defense,” Loyola Chicago coach Drew Valentine said.

Missouri State trailed by seven during the first half but led 35-33 at halftime and opened the second half on an 11-1 run in a meeting of the top two teams in the MVC.

Aher Uguak made a 3 to pull the Ramblers within 57-42, but Mosley responded with his own 3 and shushed the crowd.

Mosley’s jumper extended the lead to 62-42. Mosley entered the game leading the MVC and was ranked 20th in the country with 20.2 points per game. He averaged 33 points in his previous four games, and he scored a career-high 43 on Jan. 8 against Northern Iowa.

“He’s a gym rat. He’ll come back out here right now and shoot if they let him come back and shoot,” Ford said.

“The message after the game was we have to compete better, we have to play 40 minutes,” Norris said. “Let this one sink in.”

The Bears — who have won four straight and seven of eight — also were the last conference team to beat Loyola Chicago at its host venue (Feb. 17, 2019). The Ramblers had won 23 straight MVC games at Gentile Arena.

“I’m just happy we don’t have to come back,” Ford said.

Ramblers: Loyola Chicago’s ranking will take a hit after it entered the AP Top 25 Monday for the first time this season.

“I’m proud of our guys, proud of their battle, their fight, their grit,” he said. “But there’s so much room for improvement."

Mosley scored 40 for the second time in five games. It was the fifth 40-point game in school history.