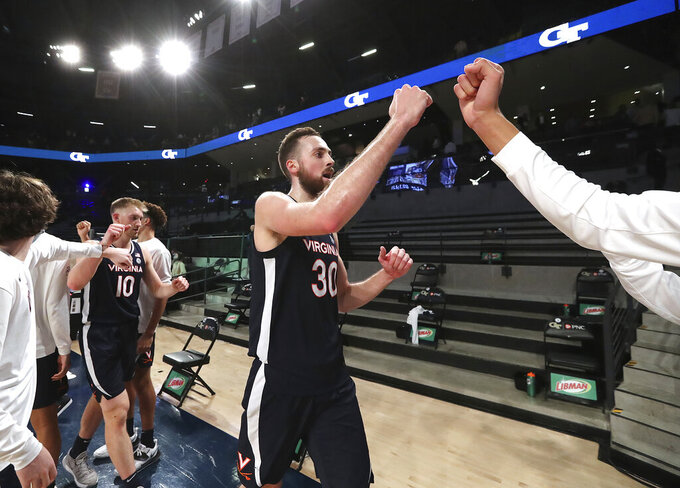 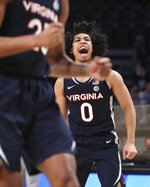 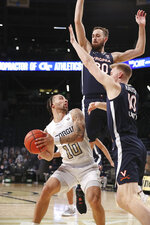 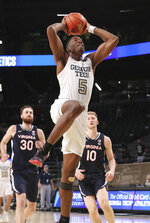 ATLANTA (AP) — When Kihei Clark failed to touch iron on a 3-pointer nearing the midway point of the second half, the Georgia Tech student section let him have it.

Clark wasn't fazed. He kept on shooting — and got the last laugh.

Trey Murphy III scored 18 points and Clark added 14 — all in the second half — as No. 9 Virginia pulled away from Georgia Tech down the stretch for a 57-49 victory on Wednesday night.

With the Yellow Jackets focused on shutting down Virginia's top scorers, Sam Hauser and Jay Huff, Clark and Murphy had to step up.

Even after Clark threw up that air ball from long range, coach Tony Bennett told him to keep shooting.

“They were hugging up on Sam and Jay,” Clark said. “They weren't really getting open looks, so I've got to make my shots.”

Georgia Tech (9-7, 5-5) lost to Virginia for the second time this season and missed a chance to give its postseason resume a big boost.

A dismal 4-of-21 shooting performance from 3-point range doomed the Yellow Jackets, who came into the game ranked fourth in the ACC in that category (37.0%).

“I felt like we got some really good looks, but we need guys to make ‘em,” coach Josh Pastner said. “We rely on our 3-point shooting. We’re not a smashmouth team offensively.”

The Yellow Jackets led 44-41 with 6:18 remaining after Jose Alvarado hit a jumper, but the Cavaliers dominated the rest of the way.

Clark had as many 3s as Georgia Tech's entire team, finishing 4 of 8 beyond the arc. Murphy also had a big trey in the closing minutes as Virginia missed only one of its final nine shots.

After playing many of its games in empty arenas, Murphy was excited to have any sort of crowd — even a socially distanced gathering of 1,200 at 8,600-seat McCamish Pavilion.

“I like it when people are yelling at me, talking trash to me," he said. “I've missed that this year.”

In the teams' first meeting on Jan. 23, Georgia Tech squandered an 11-point lead and missed a chance to win at the buzzer with a 3. Virginia held on for a 64-62 victory.

The final minutes were a striking change from the close of the first half. Virginia was 1 of 8 from the field in the last 5 1/2 minutes and trailed 26-20 at the break.

Georgia Tech made things extremely tough, blocking a couple of shots in close and coming up with a steal on the perimeter.

The Yellow Jackets, meanwhile, picked up with a couple of easy baskets on a night when those sort of opportunities were hard to come by.

Most notably, Alvarado came up with a steal at the defensive end and passed ahead to Michael Devoe, who flipped a no-look pass to a trailing Wright for a slam.

OTHER WAYS TO WIN

Huff was held to six points, while Hauser managed only eight. But they found other ways to contribute.

One of Huff's blocks came right at the end of the first half, stuffing Wright with 1 second left as he went up for a dunk.

That gave Virginia some momentum heading to the locker room. The Cavaliers began the second half on a 9-0 run.

Virginia: The Cavaliers continued their domination in the series, winning for the 16th time in the last 18 meetings. As always, they turned to their defense to stifle a team that was eager for an upset.

Georgia Tech: The Yellow Jackets desperately needed a win to improve their chances of reaching the NCAA Tournament for the first time since 2010. They're going to need a big finish to end that drought.

Georgia Tech: Will travel to Clemson on Friday night, a game that was moved up a day so the Yellow Jackets can squeeze in the make-up of a postponed contest against Pittsburgh on Sunday.