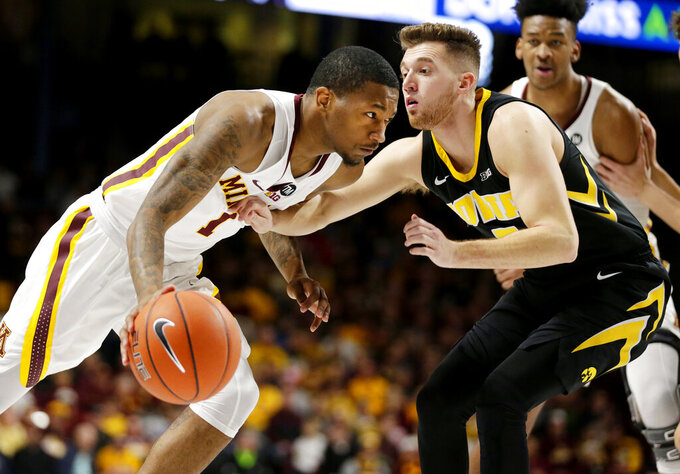 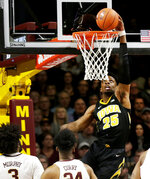 MINNEAPOLIS (AP) — From the perimeter to the post and back out again, Minnesota sliced up Iowa's defense by zipping the ball all over the court.

As the Hawkeyes reached the midpoint of their Big Ten schedule, the Gophers provided another reminder that there aren't any breaks in the conference slate.

Jordan Murphy and Amir Coffey each scored 23 points to help Minnesota hang on and beat No. 19 Iowa 92-87 on Sunday, handing the Hawkeyes their second defeat in four nights.

"We weren't very good on defense no matter what we did," Iowa coach Fran McCaffrey said. "Give them credit. They were moving the ball, getting their ball to their good players."

Freshman Gabe Kalscheur added 19 points, his most in a Big Ten game, to push the Gophers (15-5, 5-4) past the Hawkeyes (16-5, 5-5) into sixth place in the conference despite a late slump at the free-throw line that nearly derailed their upset.

"It was pretty good for us to see that we can play like that," Murphy said, adding: "We're really hard to guard, and we were passing the ball very well. Hopefully we just keep carrying that effort on."

Luka Garza matched his career high with 25 points and Isaiah Moss pitched in 23 points on 6-for-10 shooting from 3-point range, but the Hawkeyes didn't bounce back with much verve from their 15-point loss at home to sixth-ranked Michigan State on Thursday.

"I just didn't think we were as locked in as we wanted to be from the tip," Garza said. "We just weren't able to get the intensity up and pressure."

The Gophers, who stormed back strong from a 59-57 loss at fifth-ranked Michigan that capped a rough three-game stretch, posted their highest score in regulation of a Big Ten game since a 95-89 win against Iowa on Feb. 25, 2014.

"We were really sharing it," Minnesota coach Richard Pitino said. "That was our best offensive performance. It's not about what you necessarily run, it's how you run it. I thought we spaced the floor really well."

The Gophers nearly matched their most recent final total score with a season-high 55-point first half. Murphy was the catalyst, whether backing down the bigger Cook or Garza for an all-muscle layup in the lane or flicking a high-low pass to fellow frontcourt mates Matz Stockman or Eric Curry from the heart of Iowa's zone defense. The 6-foot-7, 250-pound senior even swished a 3-pointer to beat the halftime horn, just his fourth make from long distance this season.

Moss helped keep the Hawkeyes within realistic range of a rally by making all four of his 3-point tries in the first half, and Cook and Garza combined for 23 points off just 14 field goal attempts over the first 20 minutes. Garza's layup with 6:02 left before the break gave the Hawkeyes a 37-36 lead, but that was their last of the game. The 6-foot-11 sophomore made 3-pointer with 3:32 to go that brought Iowa within 81-76, but four points was as close as the Hawkeyes came in the second half.

"That was pretty cool to see, obviously, to be recognized for something like that, being at my size," Murphy said.

Twice in a five-minute span early in the second half, Dupree McBrayer finished a fast break off a steal with a lob to Coffey for a dunk. McCaffrey was upset enough by the energy level that he sent all five starters to the bench at the first media timeout.

Iowa's reserves held their own, and the starters were sharper upon return. Though Coffey's 3-pointer stretched the lead to a game-high 81-65 with 5:50 to go, the Hawkeyes began using their three-quarters-of-the-court trap to better advantage.

Thanks to seven of eight misses at the free-throw line by Minnesota in one 3½-minute stretch, Iowa made a strong final push. But McBrayer made one of two foul shots with 47 seconds left to push the lead to 85-80, and the Hawkeyes were never able to make it a one-possession game.

Iowa: The Hawkeyes, who are second-to-last in the conference in points allowed, simply didn't force the Gophers into enough turnovers or forced shots despite a 34-26 rebounding advantage. With consecutive losses, they were in danger of falling out of the AP Top 25 poll on Monday.

Minnesota: Kalscheur went 3 for 10 from 3-point range for the Gophers, who entered with the third-worst shooting percentage (31.6) from behind the arc in the Big Ten. They solved Iowa's zone with slick passing and pure hustle, but they must be better from long range down the stretch to keep up in the conference race.