Murphy's late jumper gives Pittsburgh a 74-72 win over BC 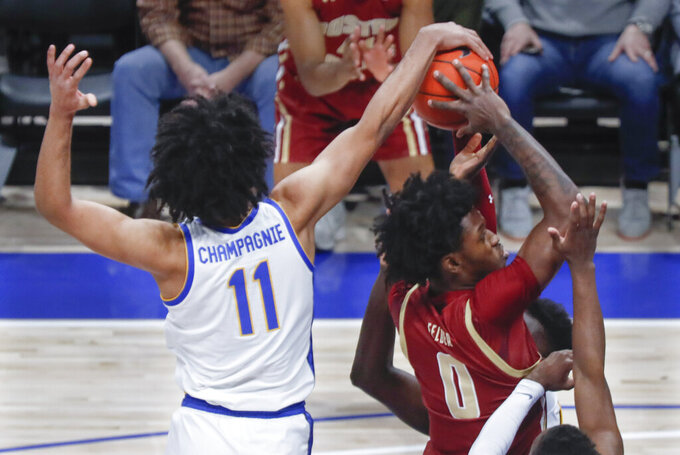 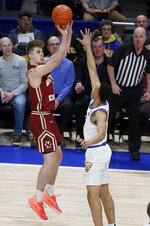 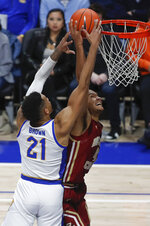 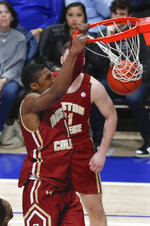 PITTSBURGH (AP) — Ryan Murphy hit a pull-up jumper from the top of the key with 4 seconds remaining to lift Pittsburgh to a 74-72 victory over Boston College on Wednesday night.

The Eagles trailed by 10 with less than 5 minutes to go but drew even on a Derryck Thornton lay-up with 12 seconds to go. The Panthers opted not to call time-out and Murphy delivered to give Pitt back-to-back Atlantic Coast Conference wins for the first time in nearly three years.

Justin Champagnie led the Panthers (13-6, 4-4 ACC) with 17 points. Au'Diese Toney added 16 and Trey McGowens scored 12 of his 14 points in the second half as Pitt erased a 14-point deficit before nearly blowing it. Murphy, a junior college transfer who has provided a spark in his first season with the Panthers, finished with 11 points on 4-of-5 shooting, including 3 of 3 3-pointers.

Jay Heath paced Boston College (9-10, 3-5) with 16 points. Five Eagles finished in double figures, including 13 points each by Thornton and Jairus Hamilton. Forward Steffon Mitchell had 12 points and three rebounds but the Eagles dropped their fourth straight when their late rally came up just short.

Champagnie was right in the middle of the rally. He scored the Panthers' final six points of the opening half, including a running bank shot just before the horn that drew Pitt within 33-28 at the break. The Panthers kept the momentum rolling after halftime. McGowens started the second half with a breakaway dunk and Champagnie followed with a putback. Two Xavier Johnson free throws put the Panthers in front and when McGowens knocked down a runner, Boston College appeared to be reeling.

Not quite. The Eagles hung in there by forcing the Panthers into a series of late mistakes, the biggest a turnover by Champagnie with 31 seconds to go and Pitt nursing a two-point lead. The ball made its way to Thornton, who blew by a defender for an easy layup that appeared to leave the Panthers stunned.

All the Panthers, that is, except Murphy. The junior made a splash early in the year by using a “bow and arrow” celebration after momentum-shifting 3-pointers. He kept the arrows in the quiver in the final seconds, instead simply raising his arms after the biggest shot of his brief tenure at Pitt.

The Eagles, blown out in each of their last three games following an upset win over Virginia on Jan. 7, jumped to 33-19 lead despite 10 turnovers. Knocking down 6 of 11 3-pointers helped. So did a Pitt offense that looked disjointed at best over the opening 18 minutes. Champagnie provided the late spark to bring the Panthers to life, and Pitt pulled away to win consecutive ACC games for the first time since Feb. 8-11, 2017.

Boston College: The win over the Cavaliers seems like a long time ago. What appeared to be a potentially season-defining triumph instead looks like an anomaly.

Pitt: The Panthers have to learn how to close out games. Pitt's offense was pedestrian in the second half of a win over North Carolina on Saturday. The Panthers followed a similar pattern against the Eagles, easing up once their lead moved to double digits.

Pitt: Travels to Syracuse on Saturday for the first of two meetings with the Orange.