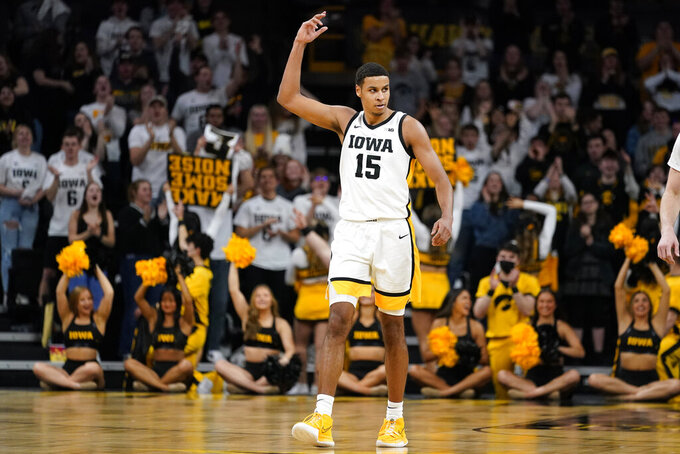 Iowa (14-7, 4-6 Big Ten), which went into the game No. 3 nationally in fewest turnovers per game at 8.9, committed six. The Hawkeyes scored 21 points off 12 Minnesota turnovers.

Payton Willis hit a 3-pointer and Luke Loewe added two more in a 110-second span to give Minnesota a 52-47 lead with 15 minutes to play, but the Golden Gophers made just two of their next 16 field-goal attempts. Murray had eight points and Ahron Ulis added seven as Iowa scored 26 of the next 31 before McCaffery hit a 3-pointer to give Iowa its biggest lead of the game at 71-53 with 3:33 remaining.

McCaffrey made a layup to start the decisive spurt, Murray followed with another and the Iowa defense forced back-to-back shot-clock violations. Murray sank a 3-pointer to give the Hawkeyes the lead for good. Filip Rebraca scored in the paint to make it 51-47 with 12:28 to play.

Loewe made 7 of 9 from the field, including 4 of 5 from 3-point range, and finished with 19 points for the Gophers. Willis added 16 points and eight rebounds.