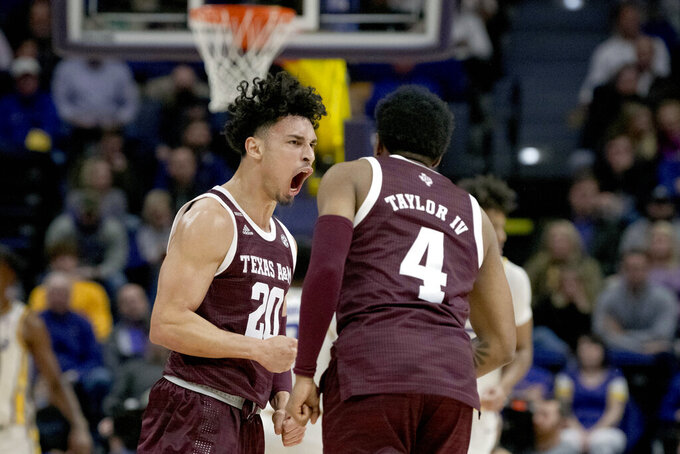 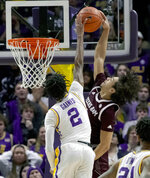 BATON ROUGE, La. (AP) — Brandon Murray capped a 21-point performance with a pair of clutch free throws in the final minute, and No. 19 LSU outscored Texas A&M 13-2 in the last 3:34 to beat the Aggies 70-64 on Wednesday night and snap a three-game skid.

“Brandon Murray is just a warrior,” LSU coach Will Wade said. “It's been a rough couple weeks and we needed something positive to happen to us, and I was very, very proud of our guys.”

The Aggies, who lost to LSU for the ninth straight time, looked poise to seize control when Quenton Jackson's layup gave them a 62-57 lead with 3:45 left.

But with top offensive threat Tari Eason on the bench because of cramps, LSU (16-4, 4-4 Southeastern Conference) battled back and tied it at 64 when Mwani Wilkinson hit a 3 from the left corner on his first shot of the game with 1:18 to go.

Aggies guard Marcus Williams then missed a jumper, and Jackson and Andre Gordon each missed put-back chances in the paint before Murray grabbed the rebound for LSU with 37 seconds left.

After Eric Gaines gave LSU the lead with two free throws, he blocked Williams at the rim on the other end.

“I saw (Williams) by himself and went for it even though I had four fouls,” Gaines said. “I had to make that attempt. And I did. I got the block.”

The long rebound went straight to Aggies guard Tyrece Radford, but he missed a 3 for the lead and Murray all but sealed the game with his free throws.

“We knew it was going to be a dogfight," Murray said, adding that Texas A&M “played really hard and aggressive, but we ended up doing what we had to do.”

"In a game as highly contested as this one, especially on the road, we have to do a better job,” Williams said.

Eason had 14 points and nine rebounds for LSU in his first start of the season but was limited to 27 minutes because of cramping. Wade said Eason received intravenous fluids after the game.

Neither team led by more than six points in a game that included 11 lead changes and 10 ties.

Gordon got off to a blazing start for the Aggies, hitting five of his first seven shots, including three from deep, for 13 points. His soaring put-back dunk gave A&M a 27-25 lead.

Murray scored 10 of his points in the opening 20 minutes, hitting a pair of early 3s to keep the Tigers close.

LSU matched its largest first-half advantage when Gaines' free throw made it 34-30 entering the final minute.

Texas A&M: Hasn't won at LSU since 2017 and fell to 2-14 all-time in Baton Rouge. That streak might have ended if the Aggies hadn't missed their last six shots, or if they hadn't missed seven of 20 free throws on the night.

LSU: The Tigers overcame the absence of considerable experience and production with senior guard Xavier Pinson (10.9 points per game) missing his fifth straight game with a knee sprain and senior forward Darius Days (13.5 ppg) missing his first game this season.

Shareef O'Neal, son of former LSU star Shaquille O'Neal, helped pick up the slack. Playing in his fourth game this season because of a nagging foot injury, O'Neal had seven points, three rebounds and a blocked shot in a season-high 20 minutes.

Wade remained unbeaten against A&M and avoided what would have been LSU's first four-game losing streak since he was hired before the 2018 season.

LSU, which made 20 of 47 shots, grabbed offensive rebounds on 15 of its 27 misses, converting those into 12 points.

Wade noted one of LSU's tactical adjustments was to assign four players to seek offensive rebounds instead of the usual three — a move he said “was really, really productive.”

LSU: Visits TCU on Saturday as part of the Big12/SEC Challenge.