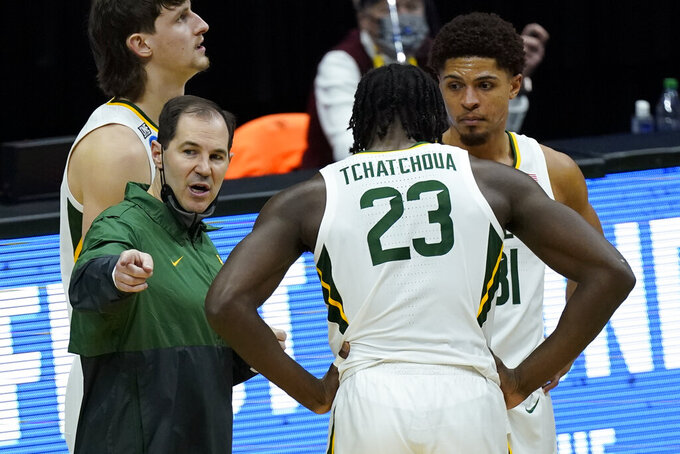 Baylor head coach Scott Drew talks with Tchamwa Tchatchoua (23) during the second half of a college basketball game against Hartford in the first round of the NCAA tournament at Lucas Oil Stadium in Indianapolis Friday, March 19, 2021, in Indianapolis, Tenn. (AP Photo/Mark Humphrey)

INDIANAPOLIS (AP) — The sight seemed a bit strange at the time.

Eric Musselman, the veteran who has led teams everywhere, from the NBA to overseas, was on the bench at Arizona State, assisting coach Herb Sendek. With his resume, Musselman could have been an NBA assistant or possibly a head college coach somewhere.

He had a different plan in mind. A head college job was his goal, but he wanted to do it right.

There would be no figuring it out as he went along. Musselman was going start at the bottom and build from there.

“I was clueless, but I wanted to try, I wanted to learn,” Musselman recalled this week. “There’s probably not a lot of former NBA head coaches that are willing to be a college assistant coach to learn, but I knew what I didn’t know.”

Musselman's ground-up method has allowed Arkansas to regain a bit of its glorious past in two short years.

He had the Razorbacks in position to make the NCAA Tournament his first year in Fayetteville before the season was called off. This year, he has them in the Sweet 16 for the first time since the Nolan Richardson “40 minutes of Hell” nearly three decades ago.

Arkansas (24-6) will face No. 15 seed Oral Roberts (18-10) in the South Region semifinals on Saturday with a chance to reach the Elite Eight for the first time since the 1995 team played for a national championship.

Musselman is right on schedule.

The son of former NBA coach Bill Musselman has coached at nearly level of the professional basketball world, from the minor leagues to national teams to two stints as an NBA head coach.

When Musselman set his sights on college coaching, he narrowed his focus. If he was going to succeed, the foundation had to be there.

Musselman began his ground-up education of the college game by becoming an assistant for two seasons under Sendek, one of basketball's sharpest college minds. Musselman moved on to LSU, where he got to experience the NCAA Tournament for a second time under Johnny Jones.

“Coach Sendek took a flier on me with no recruiting experience. I didn’t know what a buy game was for nonconference scheduling,” Musselman said. “Two great years and same thing when I went to work for Johnny Jones at LSU. I thought that was a great opportunity as well.”

That led to the job at Arkansas, where he has quickly turned around a program that has had hit-or-miss success since Richardson was fired in 2002.

“I think there is an aggressiveness and a swag and a confidence and an enthusiasm,” Texas Tech coach Chris Beard said before Musselma's Razorbacks knocked his team out of the bracket. “What I do know about coach is he is a basketball guy. I don’t think he sits around thinking about what he is going to do after coaching. I don’t think he is probably working on his law degree behind the scenes. Basketball guy, right? Loves it, eats it, drinks it, sleeps it."

Both have overcome adversity to reach the Sweet 16.

The Bears (24-2) were criticized late in the regular season for not being the same team they were before a second COVID-19 pause. They certainly have found their form now that the NCAA Tournament has started, beating Hartford and Wisconsin by a combined 37 points.

“They’re a tough, dynamic, physical team that really gets after it,” Villanova forward Jeremiah Robinson-Earl said.

So are the Wildcats.

Villanova looked like a team that could make a deep March run, but slipped into an unfamiliar underdog role when point guard Collin Gillespie suffered a season-ending knee injury in the regular-season finale.

The Wildcats (18-6) followed that with a loss to Providence in the opening round of the Big East Tournament and many thought they would be a 12-5 upset loser to Winthrop. Villanova beat the Eagles by 10 and thrashed the next potential bracket buster, No. 15 North Texas, to reach the Sweet 16 for the fifth time the last seven NCAA Tournaments.

“I think they’re getting comfortable with the personnel they have,” Baylor coach Scott Drew said. “Great teams always adapt and Villanova is a great team. They have a great coach. You knew they would figure it out.”