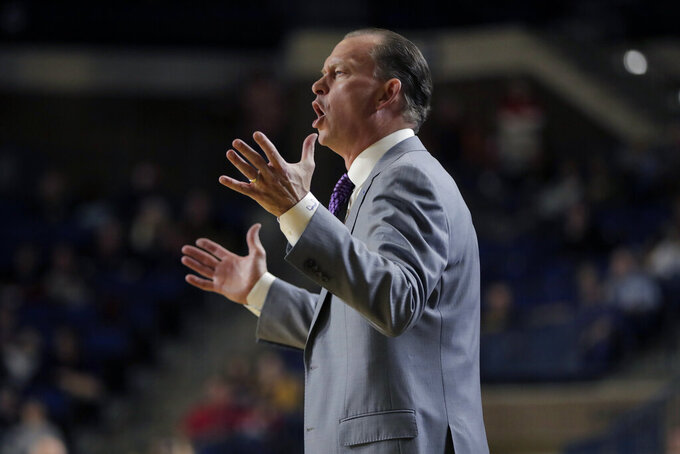 East Carolina coach Jo Dooley talks to his team during the first half of an NCAA college basketball game against Navy at the Veterans Classic Tournament, Friday, Nov. 8, 2019, in Annapolis, Md. (AP Photo/Julio Cortez)

Cam Davis scored 14 and Greg Summers added 13 for Navy, which evened its record after falling to George Mason in overtime three days earlier.

After going 10-21 in his first season at East Carolina, coach Joe Dooley signed seven junior college transfers and four freshmen. The Pirates' 11 newcomers are most in the country, and it's apparent that they're still learning how to play together.

The Pirates had 19 turnovers, shot 41 percent and were outscored 39-28 in the second half.

After falling behind 29-23 at halftime, Navy made little headway until Carter made two free throws and a 3-pointer to spark a 12-2 run that gave the Midshipmen their first lead since the game's opening minutes.

LeDay then sandwiched a pair of dunks around a 3-point bank shot by J.J. Miles for a four-point advantage, but Navy answered with a 9-2 spurt that began with a three-point play by Davis and four straight free throws by Summers.

The Midshipmen stayed in front by sinking six free throws over the final 42 seconds.

In the first game of the annual Veterans Classic, No. 24 Auburn defeated Davidson 76-66.

Navy has now won twice in the six-year history of this tournament, also defeating Pittsburgh in 2017. The Midshipmen have lost to Maryland, Ohio State, Florida and Michigan State.

East Carolina: The rebuilding Pirates lack experience, and their uncertainty down the stretch shows they've got some growing to do before opening play in the American Athletic Conference.

Navy: The Midshipmen always hustle, play with grit and won't hesitate to dive after a loose ball. Sometimes, that's good enough — even with 22 turnovers.

East Carolina seeks to rebound with a trip to Appalachian State on Tuesday night.