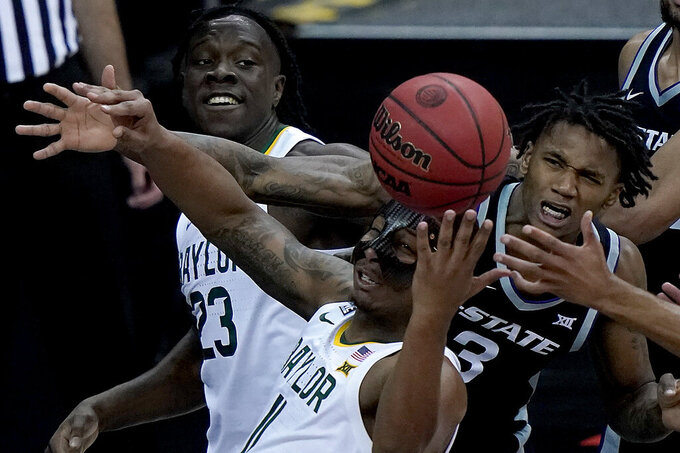 Baylor's Jonathan Tchamwa Tchatchoua (23) and Mark Vital (11), along with Kansas State's DaJuan Gordon (3), battle for a loose ball during the second half of an NCAA college basketball game in the second round of the Big 12 Conference tournament in Kansas City, Mo., Thursday, March 11, 2021. (AP Photo/Charlie Riedel) 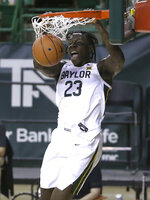 Roland Houston tells his players at the NBA academy in Africa that “there's nothing like cutting down a net.”

Two of his former students did just that when Georgetown and Iona won their conference tournaments, and they'll have another opportunity in the NCAA Tournament.

In all, eight NBA Academy alumni are playing in the men's tournament, which is a high for the league's still-growing global academy system that placed recruits at Division I schools for the first time in 2018.

“We’re like proud parents over here,” said Houston, the technical director for the NBA's academy in Senegal. “To know that a couple of our guys have cut nets in their conference tournament ... and to know that both of these kids had that experience, we’re walking around like proud peacocks.”

The NBA began opening residential academies — for teenage boys — a few years ago and now has six, in Australia, Senegal, Mexico, India, and two in China. The league works with young women through developmental camps, rather than academies, and says seven of those alumni are playing in the women's NCAA Tournament.

“It’s really just taking off and just starting to really see that traction with our alumni starting to have an impact," said Chris Ebersole, the NBA's senior director of international basketball operations.

Only one NBA academy alum has had a taste of the men’s NCAA Tournament — Caffaro, a 7-footer from Argentina. He trained in Australia and was redshirted for the 2018-19 season, ending in a national championship for the Cavaliers. Virginia (18-6) earned a No. 4 seed and will play 13th-seeded Ohio (16-7) in the first round on Saturday.

Tchamwa Tchatchoua is a key bench player for No. 1-seed Baylor (22-2), which faces Hartford in the first round on Friday. The 6-foot-8 sophomore, who earned the nickname “ Everyday Jon ” for his work ethic, spent two years at the NBA Global Academy in Canberra, Australia.

“It was a huge learning experience," the Cameroonian said of his time Down Under in an interview with Big 12 Conference media. “It allowed me to grow as a man, as well."

Vescovi, a sophomore guard from Uruguay, has started nearly every game for the Volunteers (18-8) since becoming eligible in January 2020. He left home at the age of 16 to attend the NBA's academy in Mexico City before switching to Australia for six months. Tennessee is a No. 5 seed and plays 12th-seeded Oregon State (20-6) on Friday.

The 6-foot-3 Vescovi had attended the Final Four in 2018 as part of an NBA Academy trip, posting a photo on his Instagram page from San Antonio. The NBA traditionally brings academy players to the NCAA Tournament to expose them to elite college basketball.

“Now to have those same players ... playing in it and understanding the stage that they’re on, for us it’s pretty cool to see that convergence, and we know it’s going to grow each year,” Ebersole said.

For women, there are no current plans for residential academies. The camp-based model “is working really well,” Ebersole said. Among those campers were current Connecticut freshmen Aaliyah Edwards and Nika Muhl.

The Africa academy alums are Ighoefe and Junior Joseph, both from Nigeria.

Ighoefe is less polished but the 7-foot center earned praise from coach Patrick Ewing after the Hoyas beat Marquette in the Big East Tournament.

“He came in and was huge for us,” Ewing said of Ighoefe's 15 minutes off the bench. “He may not have scored a lot of points but he was huge defensively, clogging up the paint, making them make mistakes.”

Georgetown is a No. 12 seed and faces fifth-seeded Colorado. And Iona has a tall task as a No. 15 seed against second-seeded Alabama (24-6). Both games are Saturday.

“Nelly had a good skill set when he left us and a great work ethic,” Houston said. "Timothy has more growth areas as far as on the offensive end, than Nelly, but he’s a hard worker also.

“We gave them a strong foundation. They understood the matter of urgency, which we stress here, which is stressed in the USA. So they were prepared.”