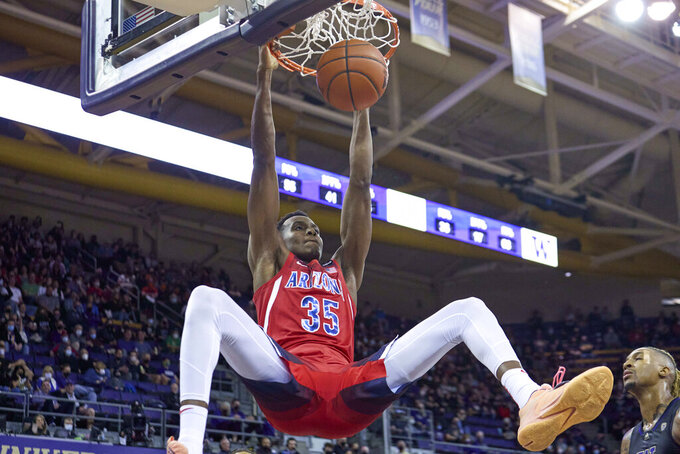 Christian Koloko has long offered potential as a rebounder and defender. Now the Arizona big man has worked to develop some needed offensive skills to improve help his NBA draft stock.

He has made a big leap in his third season with the third-ranked Wildcats, including adding some back-to-the-basket moves like a short hook shot to offer scoring options beyond just lobs, putbacks or dunks.

That’s allowed him to increase his scoring average significantly from his first two seasons, when he averaged just 3.7 points and never scored more than 11 points. Those developing offensive skills complement his reputation as a rim protector and floor-running big man able to hit the glass.

“I’ve told you guys forever how good I think (Koloko) is,” first-year coach Tommy Lloyd said earlier this season. “I think he’s a problem for anybody. For a while, the biggest thing was just making sure he believed it. I think he believes it now.

“You’re seeing it in his effort and the way his teammates react to him. And it’s been a really awesome progression to watch.”

STRENGTHS: Koloko’s biggest upside comes as a shot blocker. He ranked 11th nationally by averaging 3.08 blocks entering Wednesday’s games. He has also shown promise with his work on his game, notably going from being a 35% shooter at the foul line two years ago to 74.1% this year – a welcome sign for a player who has nine games with at least five free-throw attempts.

WEAKNESSES: Beyond this season’s gains, Koloko still has a long way to go in adding more elements to his offensive game. That includes his ability to step away from the basket to reliably make a jumpshot.

Some other NBA prospects around the Pac-12:

JOHNNY JUZANG, UCLA: The 6-7 guard was a preseason Associated Press All-American after leading the Bruins to the Final Four. He’s upped his numbers in scoring (17.8), rebounding (5.2) and 3-point percentage (.371) from last season as a second-round prospect.

BENNEDICT MATHURIN, Arizona: The 6-6 guard is a lottery prospect averaging a team-high 17 points with athleticism and shooting range (37% from behind the arc). He's made at least 50% of his shots in four of the last five games.