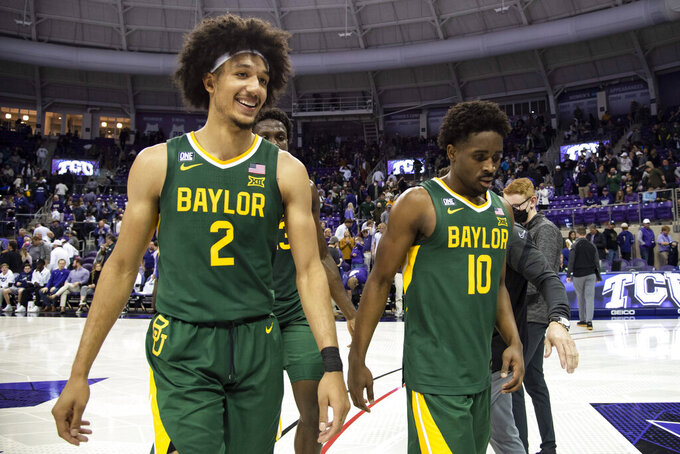 The curious thing about the Big 12 this season is that while it might be the toughest conference in the country, boasting the defending national champion and three other Top 25 teams, it doesn't have a single, slam-dunk lottery pick.

Kendall Brown of Baylor might be the best bet.

With remarkable athletic ability, a fierce competitive nature and the ability to take over a game, Brown has surged up draft boards during his freshman season in Waco. Just look at his performance earlier this season at Oregon, when he scored 15 of his 17 points in the second half to help the Bears overcome a 10-point deficit and squeak out a 78-70 win.

Among his latest starring turns was a 10-point, eight-board performance as the No. 4 Bears beat Oklahoma last weekend.

Yet, as Baylor guard Adam Flagler said, “He's so selfless." Brown only took three shots and scored two points during a game at West Virginia. He pulled down eight rebounds, dished out a couple of assists, did not commit a turnover and played lockdown defense in a 77-68 victory.

“He's a competitor. He never complains about anything,” Flagler said. “He just goes out and plays at a high level.”

The Big 12 was always going to have a tough time living up to last year's draft, when Oklahoma State's Cade Cunningham went No. 1 overall to Detroit. Baylor's Davion Mitchell went No. 9 to Sacramento and Kai Jones of Texas went to the Knicks to give the league three of the first 19 players off the board; four more players were selected in the second round.

Brown could be the best of a relatively shallow pool of talent, and even his outlook is based more on projection than his current ability. He doesn't turn 19 until May and, as Baylor coach Scott Drew said, his game is improving every day.

“For all freshmen,” Drew explained, “it's an adaptation at the beginning of the Big 12: the physicality, the speed, just how hard everything is. And I think it takes some getting used to. And hopefully in the second half (of the season), he can keep improving, because he's a lot more physical and a lot more sure of himself out there.”

STRENGTHS: Brown is the prototypical wing with otherworldly athleticism. He's capable of jumping out of the gym, and when you combine that with his strength, he's able to take the ball to the rim and finish through traffic. He also has a long wingspan, allowing him to guard nearly every position on the floor, and is a willing lock-down player on defense.

WEAKNESSES: Brown is shooting an incredible 64.8% from the field this season, but that number is misleading: Most of his buckets have come at the rim. He's still developing an outside shot — Brown is shooting just 33% from beyond the arc — and he will need to be able to hit that consistently to be more than just another athletic wing in the NBA.

DRAFT PROJECTION: He is a potential first-round pick, but whether he climbs into the top 10 could depend heavily on how he performs down the stretch. Make a big impact in the NCAA Tournament and parlay that into a nice combine workout and Brown could be one of the first wings selected this summer.

Other prospects around the Big 12:

SG OCHAI AGBAJI, KANSAS: Once a fringe draft prospect, Agbaji's stock has continued to soar this season. He just scored a career-high 39 points in a double-overtime win over Texas Tech, and his gutsy performance leading the Jayhawks back from a 16-point deficit to beat Kansas State showcased his competitive streak.

PF TRE MITCHELL, TEXAS: Another newcomer to the league this season, Mitchell averaged 18.8 points and 7.2 boards for UMass last season. Those numbers have been cut in half at Texas, but part of that is the fact that Mitchell no longer has to carry such a load. His future could depend on his ability to better stretch the floor.