NBA Prospect Watch: Jaylin Williams on a roll for Arkansas 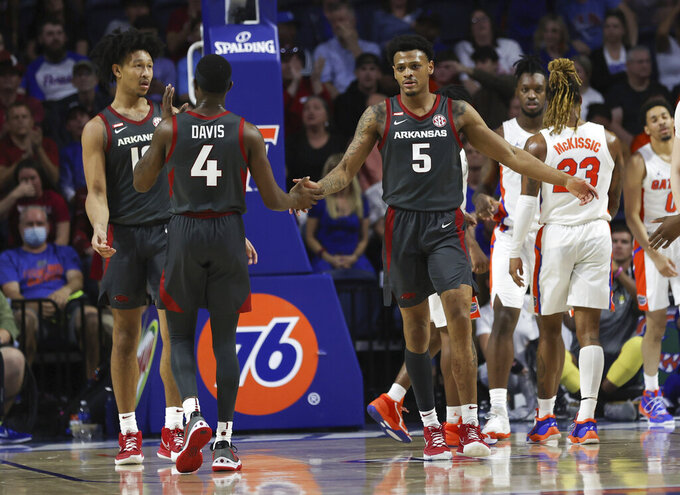 Arkansas guard Au'Diese Toney (5) celebrates with Davonte Davis (4) and Jaylin Williams during the second half of the team's NCAA college basketball game against Florida on Tuesday, Feb. 22, 2022, in Gainesville, Fla. (AP Photo/Matt Stamey) 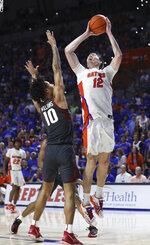 There’s no other big man in the Southeastern Conference like Jaylin Williams.

The 6-foot-10 Arkansas forward scores, rebounds, passes and makes 3-pointers. He is also one of the best post defenders in the league, evidenced by the team-high 44 charges he has taken to go along with 34 blocks and 39 steals.

He plays with high energy and has an even higher ceiling. Although he’s rarely listed on NBA mock drafts, he surely has to be turning heads with his recent run that included SEC player of the week honors Monday.

Arkansas has won 12 of its last 13, and Williams has scored in double figures in each of those games.

“Jaylin is having a great year,” teammate Davonte Davis said. “As the season goes on, Jaylin Williams is probably going to finish every game with a double-double if he continues to do what he does.”

STRENGTHS: Williams does a little bit of everything, but his defense gets most of the attention. Although Florida’s Colin Castleton scored a career-high 29 points against Arkansas, 18 of those came in the second half with Williams in foul trouble and guarding others. Williams played the final 8 minutes with four fouls.

“He definitely impacts (shots),” Gators coach Mike White said. “He’s really good laterally; he sniffs them out. He’s got no regard for his body, and I mean that in a positive way, complimentary. He‘s all over the floor defensively, one of the better defenders in the country. He’s an anchor down there for them.”

WEAKNESSES: He’s got range but probably not quite enough to be a stretch-the-floor power forward at the next level. He’s also still 19 years old, so there's a good chance he improves with more work. He's shooting 27% from behind the arc (13 of 48).

DRAFT PROJECTION: Williams’ athleticism and upside could be enough for a team to take a chance on him with a second-round pick.

Others worth watching around the SEC:

C WALKER KESSLER, AUBURN: Although the 7-foot-1 sophomore had one of his worst games of the season at Florida last weekend – it was just the second time he failed to block a shot – he’s shown growth in recent weeks. He had a triple-double against Texas A&M – 12 points, 11 rebounds and 12 blocks – and finished with 19 rebounds at Arkansas.

G KARIO OQUENDO, GEORGIA: The 6-foot-4 sophomore is a scoring machine and usually the lone bright spot for the Bulldogs. A transfer from Florida SouthWestern, the same community college that sent Keon Ellis to Alabama last year, Oquendo had a career-high 33 points in a loss at Texas A&M on Tuesday. He is averaging 23 per game over Georgia’s last six.

G SCOTTY PIPPEN JR., VANDERBILT: The 21-year-old son of Chicago Bulls great Scottie Pippen is getting to the free-throw line regularly and taking advantage. He leads the NCAA with 220 trips to the charity stripe and 162 makes. He leads the SEC in scoring at 19.7 a game and has been at his best of late, averaging 25.5 points over Vandy’s last four.