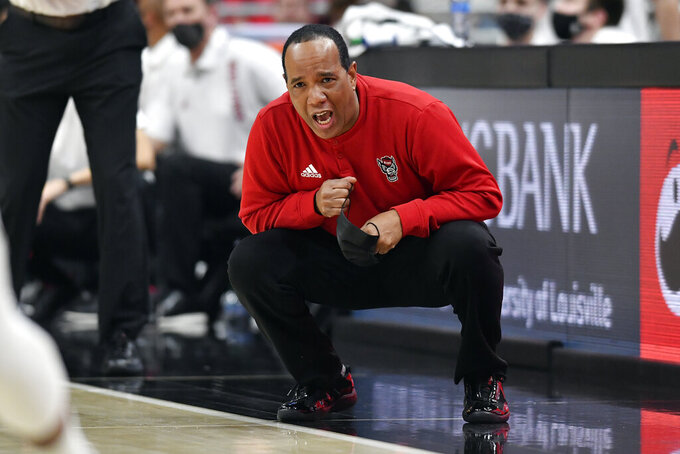 FILE - North Carolina State coach Kevin Keatts shouts instructions to the team during the second half of an NCAA college basketball game against Louisville in Louisville, Ky., Jan. 12, 2022. Keatts has overhauled his coaching staff. He had reworked the roster to add four graduate transfers and seven new players alongside the only three youngsters who saw significant action through last year’s bumpy season. (AP Photo/Timothy D. Easley, File)

The Wolfpack’s last NCAA Tournament trip came in his debut season in Raleigh. And last year marked the worst record of his head coaching career, a perilous trajectory that has put his long-term future in question in Raleigh.

So Keatts overhauled his coaching staff. He reworked the roster to add four graduate transfers and seven new players alongside the only three youngsters who saw significant action through last year’s bumpy season.

“We didn’t have a good year,” Keatts said. “And we can point to a lot of different things. Ultimately, I’m the head coach. So I take responsibility, full responsibility, of our season last year. … We wanted to get bigger, stronger and older. And I think we did.”

There’s no arguing that, at least. The newcomer quartet of guard Jarkel Joiner (transfer from Mississippi), wing Jack Clark (La Salle), and big men DJ Burns (Winthrop) and Dusan Mahorcic (Utah) have combined to play 302 college games and start 203 of them.

Those additions certainly help the depth on a team that looked lost defensively after losing top big man Manny Bates to an opening-night injury (he later transferred to Butler), and relied on second-year player Dereon Seabron (team-best 17.3 points) along with freshman Terquavion Smith (16.3).

Seabron left to pursue a professional career, but Smith returned after a flirtation with the NBA to provide the potential for high-level perimeter scoring. The 6-foot-9, 275-pound Burns could offer a complementary scoring presence inside after averaging 15 points and shooting 62.6% last year en route to becoming the Big South Conference’s player of the year.

Keatts arrived in Raleigh in 2017 promising to install a fast-paced game that included fullcourt pressure. That first team went on to beat highly ranked Arizona, Duke and North Carolina before reaching the NCAAs. His second team barely missed the field and his third was positioned to return before the pandemic wiped out the tournament.

N.C. State is picked to finish 10th in the 15-team Atlantic Coast Conference. Last year's team lost 16 of 20 regular-season league games followed by a one-and-done showing in the ACC Tournament, heading into the offseason by losing five straight and 11 of 12.

Burns sounded eager to play alongside Smith, who set a program freshman record with 96 3-pointers last year and could spread defenses to give Burns more room inside.

Burns is a willing passer, too.

“That just came from me not wanting to be a selfish big,” he said. “I noticed that most of the bigs, we complain a lot about not getting the ball, we get the ball, and it’s like a black hole and it ain't coming back out.”

Joiner speaks with confidence that comes with having 102 career college starts going back to his time at Cal State Bakersfield, and Keatts is counting on him for leadership. That was clear with the team selecting the newcomer as one of its two player representatives for ACC media day.

“I feel like being vocal, being an experienced point guard, it'll help the team in big ways,” Joiner said.

N.C. State allowed opponents to shoot 47.2% last year, ranking 335th out of 350 Division I teams and worse than all but two power-conference teams (Georgia in the Southeastern Conference and Oregon State in the Pac-12). The Wolfpack ranked 246th in KenPom's national statistics by allowing 106 points per 100 possessions.

The changes included the departure of former Virginia Tech head coach James Johnson, who was the last holdover from Keatts’ first-year assistants.