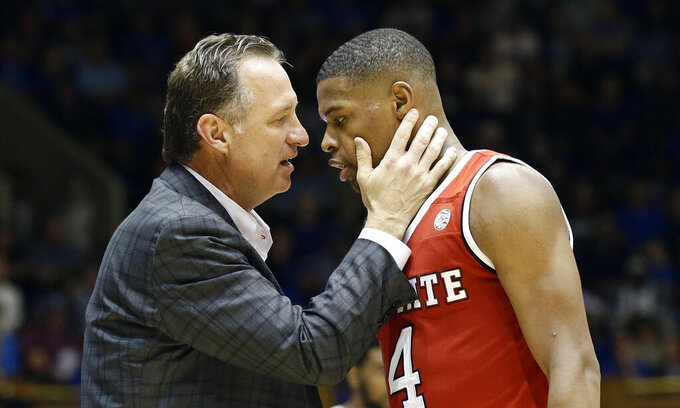 In a statement Friday, athletics spokesman Fred Demarest said the school must respond by April 14 to the recommendation. Demarest said officials are “reviewing and evaluating our options.”

The NCAA created the Independent Accountability Resolution Process (IARP) last year, a product of proposals from the commission led by former U.S. Secretary of State Condoleezza Rice in 2018 to reform college basketball amid a federal corruption investigation into the sport. The process includes independent investigators and decision-makers with no direct ties to NCAA member schools, and rulings cannot be appealed.

IARP spokeswoman Whitney Ertel declined to comment on the N.C. State case, but said involved parties have the chance to respond to any recommendation before a determination is made.

“A case can either be accepted into the independent process or it can be denied,” Ertel said. “If any case is going to be accepted, then we will make an announcement.”

N.C. State was charged last summer with four violations, including former head coach Mark Gottfried being charged individually under the provision of head-coach responsibility for violations within his program.

Specifically, the NCAA has alleged ex-assistant Orlando Early provided Smith and his associates approximately $46,700 in impermissible benefits – including $40,000 that a government witness testified he delivered to Early intended for Smith’s family in 2015.

N.C. State has argued the NCAA had not proven money was actually provided to Smith or his family, noting Smith – picked ninth in the 2017 NBA draft after one year in Raleigh – denied receiving money in a school interview in 2019.

Attorneys for Gottfried, now coach at Cal State Northridge, have questioned the fairness of the process and argued Gottfried fulfilled obligations to monitor the program.

The NCAA enforcement staff’s response in February held firm that violations had occurred.