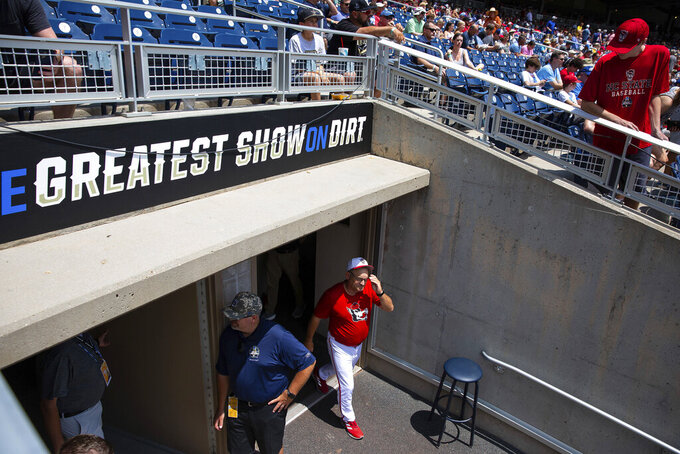 OMAHA, Neb. (AP) — Vanderbilt will advance to the College World Series finals after North Carolina State was forced to drop out because of COVID-19 protocols, the NCAA announced early Saturday.

NC State had only 13 players available during its 3-1 loss to the Commodores on Friday. The teams were scheduled to meet again Saturday afternoon in a winner-take-all Bracket 1 final.

The NCAA Division I Baseball Committee declared that game a no-contest.

“This decision was made based on the recommendation of the Championship Medical Team and the Douglas County Health Department,” the NCAA said in a statement. "As a result, Vanderbilt will advance to the CWS Finals.

"The NCAA and the committee regret that NC State’s student-athletes and coaching staff will not be able to continue in the championship in which they earned the right to participate. Because of privacy issues, we cannot provide further details.”

Vanderbilt returns to the finals for a second straight time. The Commodores won the 2019 CWS. There was no tournament last year because of the pandemic.

The Commodores will meet Mississippi State or Texas in the best-of-three finals starting Monday.

NC State players and coaches gathered at home plate to take pictures around the CWS logo early Saturday, after the rain-delayed Texas-Mississippi game was completed.

NC State was missing four starting position players and had only 13 of its 27 players available for its Friday game, which was delayed an hour after the NCAA said it needed time to complete “health and safety protocols.” NC State said “several players” had entered the COVID-19 protocol.

“The last 24 hours have been extremely difficult for everyone involved and my heart goes out to the student-athletes, coaches and staff of our baseball program,” NC State athletic director Boo Corrigan said in a statement on Saturday morning.

“The health and safety of our student-athletes and staff will always be our unwavering priority. The timing of this is simply devastating for everyone involved, but it doesn't diminish their incredible accomplishments this season.”

After the game on Friday, North Carolina State coach Elliott Avent grew frustrated and wouldn't answer directly when asked if he or the baseball program encouraged players to be vaccinated.

“My job is to teach them baseball, make sure they get an education and keep them on the right track forward,” he said. “But I don’t try to indoctrinate my kids with my values or my opinions. Obviously, we talk about a lot of things. But these are young men that can make their own decisions and that’s what they did.”

Avent rolled his eyes when asked if he's been vaccinated.

NC State did not immediately respond to a request for an interview with Murphy.

The NCAA does not require athletes, coaches and other staff working closely with a team to be tested for COVID-19 if they are fully vaccinated and showing no symptoms. Those who are not vaccinated must be tested at NCAA championships. Tests are done every other day at the CWS.

Avent said he found out there was a problem 45 minutes to an hour before the game. He told ESPN during an in-game interview that players not with the team were getting tested Friday afternoon and, if the results were negative, could have had a chance to play in the rematch Saturday.

Carson Falksken played second in place of J.T. Jarrett, Eddie Eisert was the designated hitter instead of Terrell Tatum, DeAngelo Giles moved into Vojtech's spot at third and Sam Highfill, the No. 2 starting pitcher, played first base.

Avent said he gave his available players the choice to play or forfeit Friday. They all wanted to play, he said.

Avent told reporters Monday an illness was running through the team, but made no mention of it possibly being COVID-19. He said associate head coach Chris Hart had been sick for five or six days and that Jarrett and pitcher Cameron Cotter weren’t feeling well.

The pandemic heavily disrupted college sports over the past year and three teams dropped out of an NCAA championship event because of COVID-19: The VCU men’s basketball team, the Michigan men’s ice hockey team and the Rice women’s volleyball team.