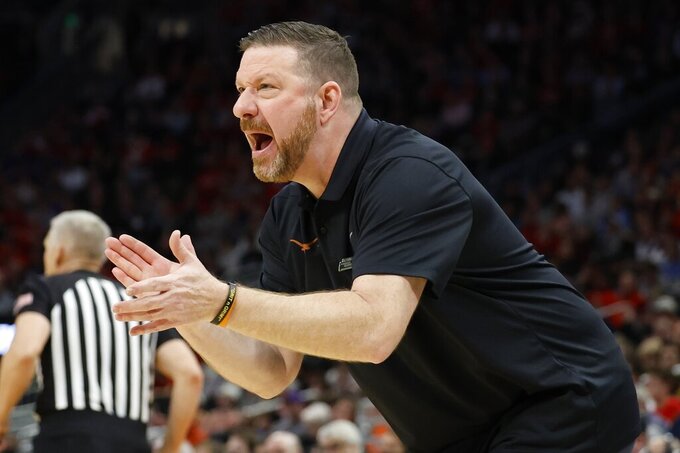 He will try to do it again Sunday when the sixth-seeded Longhorns (22-11) face the third-seeded Boilermakers (28-7) in the second round of the East Region.

In Beard’s lone season at Little Rock, his 12th-seeded Trojans won a 2016 first-round game 85-83 in double overtime over a fifth-seeded Purdue team. Two years later, Beard was at Texas Tech when the third-seeded Red Raiders won a regional semifinal 78-65 over second-seeded Purdue.

Painter and Beard know each other well. They go back to the early 2000s when Beard was an assistant on a Texas Tech staff headed first by Bob Knight and later by Pat Knight, who played AAU basketball with Painter.

Beard says many of the things he did during his lone season at Little Rock were based on the success Painter had at Southern Illinois before heading to Purdue.

“He is one of my kind of mentors in coaching,” Beard said. “I’ve reached out to him before in coaching moves, on recruiting, just on advice. I’ve had probably a dozen really meaningful conversations with Matt over the years, and he’s somebody I really listen to and respect.”

“We’re up three with 18 seconds and we don’t foul and that’s a lot of time, right, but they don’t take their shot until five seconds to go,” Painter recalled. “It really taught me a lesson in terms of most people at that time are going to go be aggressive right away because they’re up against time. They’ll even go get a quick 2 at that time.

“So that was something that really jarred me. I thought we should have fouled there, and I made the mistake of not fouling after it got under 10 seconds.”

Now they face off again, trying to send their respective alma maters to the Sweet 16.

Texas just won its first NCAA Tournament game since 2014 and is seeking to make the regional semifinals for the first time since 2008, when it advanced to the Elite Eight.

Purdue has ambitions of earning its Final Four berth since 1980. The next step is for Painter to avenge those two earlier losses to Beard-coached teams.

“The losses stick with you,” Painter said. “That’s what stings about our business. People have no idea how that churns with you five, 10 years later. Those moments just are tough, but you try to learn from it and be better and keep rolling.”

But he also wants to get something straight. Tim says he was “Timmy Buckets” long before Teddy got the nickname “Teddy Buckets” for his scoring prowess.

“I was the original Timmy Buckets,” Allen said. “It’s been my Twitter handle since like seventh grade or something like that. Then he started going crazy and he just went to Teddy Buckets.”

This won’t be the first time Texas’ Marcus Carr and Purdue have faced off. The Minnesota transfer played against Purdue three times from 2019-21.

Carr scored 27 points in a double-overtime loss to Purdue in 2019-20. Minnesota split two meetings with Purdue last season. Carr scored 19 points in the win but had six points and shot 2 of 13 in the loss.

“They do a lot of similar things, so I’m sure they’re going to be breaking out their old scouting report on me as well as what I’ve done this year,” Carr said. “I’m going to try to help my team and the coaches with just some of their tendencies and stuff they liked to do in the past.”

“Now he’s like more of a patient player,” Hunter said. “I think that comes with the nature of, you know, going to a different program. At Minnesota (a lot was asked) of him to make plays, put the ball in the basket, and now he does a little bit more playmaking than usual. He definitely can put the ball in the basket whenever he wants to. Definitely got to watch out for that.”