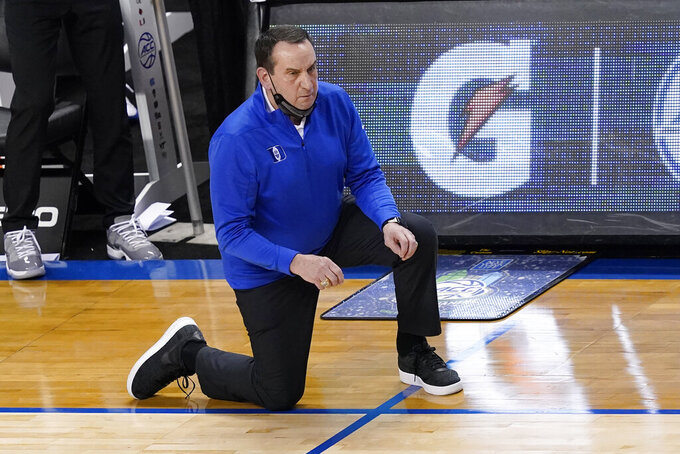 Duke head coach Mike Krzyzewski watches the action during the second half of an NCAA college basketball game against Louisville in the second round of the Atlantic Coast Conference tournament in Greensboro, N.C., Wednesday, March 10, 2021. (AP Photo/Gerry Broome)

Not this year though.

The Blue Devils, Wildcats and Cardinals were left out in the cold when the March Madness brackets were unveiled on Sunday. It is the first time since 1976 all three schools missed the tournament in the same year.

“It just shows you how hard it is to win," UCLA coach Mick Cronin said. "And there’s so many variables of things that can happen, obviously with COVID this year. There were all kinds of things that went on. I think there’s times where people take winning for granted. Sometimes you need the darkness to see the light.”

Of the three, Louisville had the best chance after Kentucky had its first losing season in 32 years and Duke had to withdraw from the ACC Tournament due to a positive COVID-19 test. But the Cardinals (13-7) were one of the first four programs on the outside of the 68-team field.

Chris Mack's squad dropped its last two games, including a 14-point loss to Duke in the second round of the ACC Tournament. The Blue Devils (13-11) are out of the field for the first time since 1995, and the Wildcats (9-16) won't be dancing for only the second time in John Calipari's 12 seasons in Lexington.

The Cardinals had a No. 56 NET ranking and a No. 46 NET Strength of Schedule, but lost six of seven against Quad 1 programs. Oregon State winning the Pac-12 Tournament and Georgetown's run to the Big East Tournament title also contributed to two at-large bids being taken away.

“They fell victim to two great runs that took spots away from the at-large board,” Barnhart said. “They didn't have many wins against teams in the field and had only one Quad 1 win. They had opportunities to improve that as the season progressed and couldn't complete enough of those to move up the line.”

Louisville could still get into the tournament if a team withdraws by Tuesday night due to COVID-19. It's the only postseason option for the Cardinals after the program turned down a spot in the NIT. Colorado State, Saint Louis and Mississippi — the other teams listed as alternates — accepted bids to the 16-team NIT field.

Colorado State (17-6) and Saint Louis (14-6) both had one major factor against them — more than half of their wins were against Quad 4 teams.

Barnhart said Colorado State's loss to Utah State in the Mountain West semifinals ended up being another metric since both were vying for at-large spots.

Belmont tied Gonzaga for the most wins in Division I, but the Bruins (26-4) lost in the Ohio Valley Conference championship game. They had a No. 90 NET ranking and were 0-1 against Quad 1 and 2 opponents.

“No postseason games is a tough pill to swallow,” coach Casey Alexander said in a statement. “It is a great reminder you have to handle your own business each day — practice and games — and not rely on anyone to do it for you.”

Among other teams that were left out:

—Western Kentucky (20-7) made it to the Conference USA championship game, but was 1-3 against Quad 1 schools, including a 24-point road loss to Houston and a home defeat to Old Dominion.

—Memphis (16-9) won 10 of its last 14 — including a 20-point victory over Wichita State — but had two losses to Houston in six days, including Saturday in the American Athletic Conference semifinals.