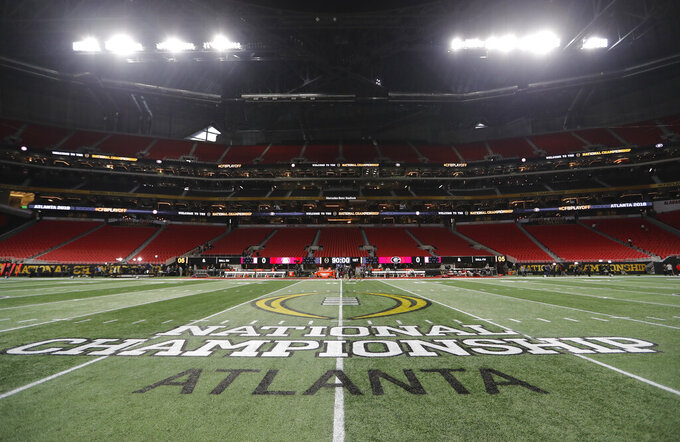 FILE - In this Jan. 8, 2018, file photo, the championship logo is seen on the field at Mercedes-Benz Stadium before the NCAA college football playoff championship game between Georgia and Alabama in Atlanta. There are more bowl games scheduled for the coming season than ever before in major college football: 42, not including the College Football Playoff championship. College football leaders are in the process of piecing together plans to attempt to play a regular season during the COVID-19 pandemic. If it is even possible, everyone anticipates there will be disruptions, added expenses and loads of stress just to get through it.(AP Photo/David Goldman)

Heeding pleas for patience from college sports leaders, the NCAA Board of Governors held off on making any decisions about whether to hold championship events in fall sports during the coronavirus pandemic.

“Today the Board of Governors and I agreed that we must continue to thoughtfully and aggressively monitor health conditions around the country and the implementation of the COVID-19 guidelines we issued last week,” NCAA President Mark Emmert said Friday.

More than two dozen Division I conferences urged the NCAA's highest governing body to delay a decision on fall championships until a majority of leagues determine whether to hold regular-season competition.

A letter from College Commissioners Association President and Ohio Valley Conference Commissioner Beth DeBauche, dated July 22, was sent to the board ahead of its Friday meeting. A copy of the letter was obtained by The Associated Press.

The CCA is comprised of commissioners from all 32 Division I conferences. The letter was supported by 27 conferences, including each Power Five conference and several that do not sponsor football. Five conferences abstained. The NCAA's Division I football oversight committee made a similar plea for patience to the board in its own letter sent earlier this week.

In its letter, the CCA said it was “concerned to learn the board is contemplating taking action soon to cancel all fall season NCAA championships” because of concerns related to COVID-19.

“We discussed other complexities in addition to the health and safety impacts, to include team availability, travel limitations and various local and state restrictions,” Emmert said.

The board’s next meeting is scheduled for Aug. 4.

The CCA's letter recommended delaying any decision on fall championships to allow more conferences to make their own decisions regarding regular-season play. The NCAA controls national championship events such as tournaments, playoffs and meets, but has no authority over what would be considered the regular season in any sport.

In major college football, the NCAA has no say: The conferences control the College Football Playoff and the bowls. The NCAA does sponsor playoffs in the second-tier of Division I football (FCS) and in Divisions II and III.

Still, calling off fall championships would send a message the NCAA doesn't believe the events can be conducted with the best interest of athletes in mind and could call into question why conferences are moving move forward with plans to play football or other sports in the first semester.

“To make championships decisions before conferences determine their regular-season plans would result in preempting the conferences’ decision-making process,” the letter said. “Accordingly, the CCA would recommend that when the majority of the sport sponsoring conferences drop or postpone their fall competitions, then it would be appropriate for the NCAA to begin a process to evaluate their own championships schedules.”

The 10 FBS conferences that make up Division I football's top tier are in the process of adjusting schedules and hoping to play a regular season that has billions of dollars in media rights deals attached to it.

The Big Ten and Pac-12 have already announced they intend to play only conference games to better manage potential COVID-19 disruptions. The Atlantic Coast Conference is considering a re-worked schedule that would include Notre Dame playing football as a member of a conference for the first time in program history.

Late Friday, Michigan State became the first school to publicly announce its entire football team has been placed in 14-day quarantine due to positive COVID-19 tests for some players and staff members.

Still, college conferences are seeking to buy time and the board help them. The hope among college sports leaders if that the pandemic can be better controlled across the country before they must make a final call on fall sports seasons that are about a month away from scheduled starts.

They are also considering repercussions beyond fall sports. Championship tournaments for men’s and women’s soccer, for example, take place in November and December, which is the first full month of the basketball season.

The CCA's letter encouraged the board to have a plan in place to address the college basketball season when a decision on fall championships is made and to avoid diverting any funds toward moving fall events to spring until it is known if NCAA basketball tournaments can be held.