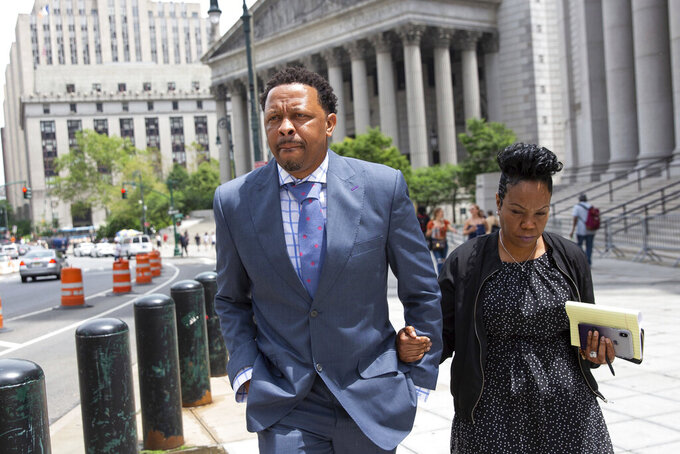 Oklahoma State has become the first school to be punished by the NCAA in the fallout from the federal corruption investigation into college basketball. The school plans to fight — and likely won't be the only one.

The Cowboys' men's basketball team was banned from the upcoming postseason among numerous penalties handed down Friday by an NCAA infractions committee panel, which found that former assistant coach Lamont Evans accepted up to $22,000 in bribes intended to help steer athletes to certain financial advisers.

That ruling made Oklahoma State the first to make its way fully through the infractions system, ahead of schools like Kansas, North Carolina State, Louisville, South Carolina and Southern California. Some of those cases have already had contentious exchanges signaling the schools were ready to fight.

That list now includes Oklahoma State, which vowed to appeal after being “stunned by the severity of the penalties."

“I can't tell you what the percentages are for success on this,” athletic director Mike Holder said in a teleconference with reporters. “I just know that I feel as the athletic director that we’ve been wronged in this case. And we want to stand up and fight for what we believe is right.”

Oklahoma State said the NCAA had agreed with the school that Evans “acted alone and for his own personal gain” while not leading to “any real benefit” for the school. Holder went as far as calling the school a victim in the case after being punished for a top-level violation.

The comments follow forceful responses from Kansas in September and March to charges against the storied Jayhawks' men's basketball program. And N.C. State ultimately argued it couldn't get a fair hearing from an infractions committee as its case ended up being accepted into the the NCAA’s new independent resolution process for complex cases.

“It goes back to everybody would like reasonable rules enforcement and appropriate process and reasonable penalties,” said Stu Brown, an Atlanta-based attorney who has worked with schools on compliance issues.

“And really what we’re arguing about or (what) these schools are thinking: the investigation and charging process has now become overhyped and unaccountable. And the penalty process now has insufficient flexibility to allow for schools that ... are cooperative and want to take responsibility, so they shouldn’t be punished quite as hard. That’s the problem.”

An appeal would put the penalties challenged by Oklahoma State on hold. While it's unclear exactly how long that would take, the process would generally require 6-8 months based on typical NCAA filing and hearing deadlines.

That's of particular interest for the Cowboys after putting together one of the nation's top recruiting classes, headlined by No. 1 national recruit and one-and-done prospect Cade Cunningham. Coach Mike Boynton Jr., who is not accused of wrongdoing, said he plans to speak further with Cunningham and other players to see if they plan to stay,

“In terms of a postseason ban for a group of kids, who were probably 15 and 16 years old when this stuff was going on, it’s completely, completely out of bounds,” Boynton said.

The NCAA penalties against Oklahoma State included three years of probation, a $10,000 fine self-imposed by the school along with an additional 1% from the program budget, recruiting restrictions and a reduction in basketball scholarships.

Evans received a 10-year show-cause order in the case tied to the federal investigation into college basketball, which became public in 2017. While Oklahoma State received a notice of allegations last year, South Carolina said in February that it had received one tied to Evans, who spent four seasons under Frank Martin before joining the Cowboys' staff in 2016.

Evans was among 10 people originally indicted by federal prosecutors, including four assistant coaches. Evans was later sentenced to three months in prison for accepting bribes in the criminal case.

“In short, the former coach in this case put his interests ahead of the student-athletes,” said Larry Parkinson, the chief hearing officer for the infractions panel that handled the case.

According to the NCAA, Evans received between approximately $18,150 to $22,000 from April 2016 through July 2017 for his influence and agreement to arrange two meetings for the advisers to gain access to players or a family member. One was for an Oklahoma State player who was unaware of any arrangement by Evans, while the other was for the mother of a player he had coached at his previous job, the NCAA said.

The report also states Evans failed to cooperate with the investigation after being fired by Oklahoma State in September 2017. Parkinson did note the school “fully cooperated” in the probe.