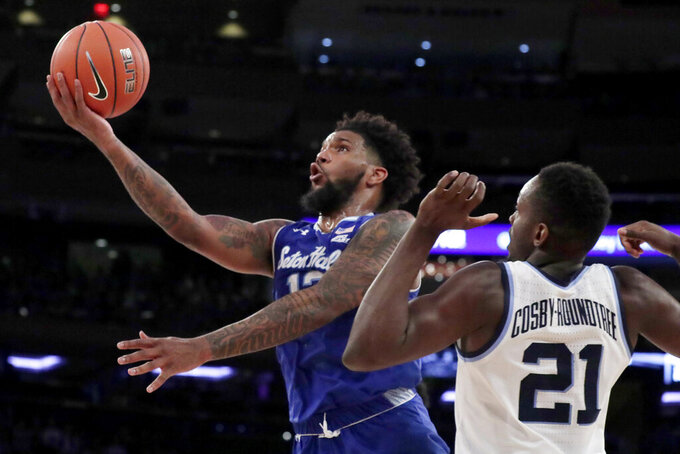 FILE- In this March 16, 2019, file photo, Seton Hall guard Myles Powell, left, goes up for a shot against Villanova forward Dhamir Cosby-Roundtree during the second half of an NCAA college basketball game in the championship of the Big East Conference tournament in New York. With preseason All America Myles Powell and three other starters back, it’s no surprise Seton Hall is No. 12.(AP Photo/Julio Cortez, File)

SOUTH ORANGE, N.J. (AP) — The season has gotten off to a shaky start for No 12 Seton Hall and basketball coach Kevin Willard.

The university announced Tuesday the NCAA is investigating the program and Willard is sitting out at least two games in what has to be considered a suspension.

Seton Hall didn't say what the NCAA enforcement staff was investigating, but it was working with the ruling body for college sports.

The Asbury Park Press reported the investigation involved transfer tampering, and the New York Post said it involved the transfer of Taurean Thompson from Syracuse in the fall of 2017.

After sitting out a year, Thompson played in 27 games last season.

Assistant coach Grant Billmeier will run the team in the games Willard misses. The Pirates, who will be looking for their fifth straight NCAA Tournament bid, beat Misericordia 112-38 in their final exhibition on Tuesday night.

The 44-year-old Willard also will miss the season opener against Wagner on Nov. 5.

Athletic department spokesman Thomas Chen said he could not provide additional information beyond the school statement.

"As head coach, Coach Willard assumes responsibility for the program, including this underlying violation, and has agreed to sit out the Oct. 29 exhibition contest and the Nov. 5 game," the statement continued. "This matter is still in review, and as a result, we will refrain from commenting any further until it is resolved. Seton Hall is and always will be committed to a culture of compliance, and we will continue to work diligently to ensure it."

Big things are expected of Seton Hall, which was selected as the preseason Big East favorite coming off a 20-14 season. The Pirates return four starters, led by preseason All-American Myles Powell.